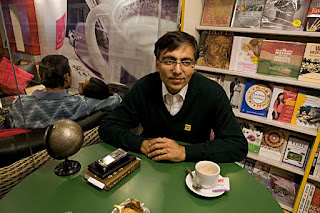 IAYP, India appoints new National Director The International Award for Young People, formerly the Duke of Edinburgh’s Award, has appointed Sandeep Dutt, as National Director for India. One of the youngest, to reach this honorary position.
Vice President Mr M Hamid Ansari presented the prestigious International Awards for Young People (IAYP) at Vice President House in the capital. Mr Ansari is the Patron for IAYP awards in India. On the very same day, the Award Programme got its new National Director too. Sandeep Dutt alumnus of The Doon School, author of Good Schools of India, and founder of Book Cafe, now set out a new course to win hearts! Appointed as National Director IAYP, has the unique distinction of being the youngest appointee since the inception of the programme in India in 1962. Currently, CEO of Book Cafe, Dutt walked into the Award world in 1975 as an aspirant for the Bronze, while at school. Worked the way up and represented India in the 1979 International Gold Award Meet in Australia, there was no looking back. Volunteered for the program periodically, and helped do the documentation, literature and design for over a decade. In 1994 the Constitution of the Award Program in India was set in place and this made working with the program even more fulfilling. Has travelled as a head training team across India, Australia, Singapore, Malaysia, Sri Lanka, and Nepal.
International Awards for Young People is an international youth development program currently operating in over 114 countries. The program seeks to channelise youthful energy into meaningful effort leading to the all-around growth of young people. The award program is meant for young people between 14-25 years of age. In India, Ms Naina Lal Kidwai, Mr Anand Mahindra, Mrs Mala Ramadorai (w/o TCSChairman), Dr Sanat Kaul, Mr Ishaat Hussain (CFO Tata Sons) and Vice Admiral Suren Govil are the Trustees of IAYP.
IAYP operates from the best of schools across India. Equally, it works with organizations for the disadvantaged and poor. The Award list gives a true picture of the sweep of activity across the country. Special Projects include the Salaam Baalak Trust, Delhi, Sir Syed Group of Schools, Ramakrishna Mission Blind Boys Academy, Emmanuel Ministry, Kolkata; and Olcott Memorial School, Chennai. Rural village schools in Vellore, Tamil Nadu (Kaniyambadi & Pennathur) are also included, said Vice Admiral Suren Govil, National Chairman of IAYP in India. To know more about Sandeep Dutt, the National Director www.sandeepdutt.com