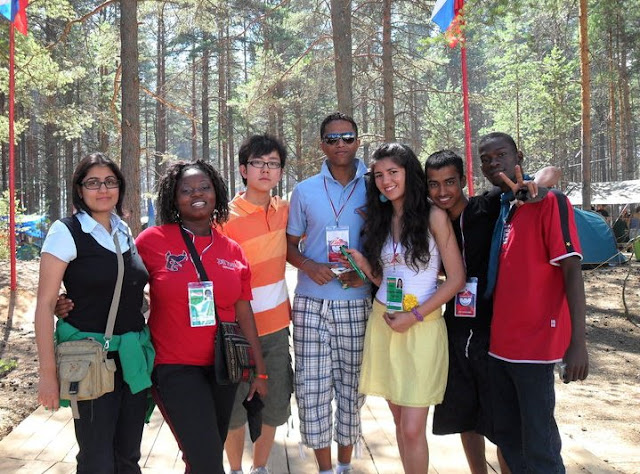 With the Award’s resounding presence already being felt in majority schools, the question that I frequently came across as a participant of the open award centre was why I opted for this programme. The answer was quite simple. I was busier in my school days than I am today! In school emphasis was placed on academics, the goal was to secure that extra mark during the board exams in order to get an extra consideration while applying to college. This goal lead to the pain staking drudgery of burning the mid night oil with the paranoia of scoring better than the others. Free time was often taken over by studies but this time with the reason of attending coaching classes for entrance exams. Thus, one never really got a chance to enhance one’s skills or go on a free spirited adventure. Our knowledge about the world was only limited to the text we managed to merrily parrot. Once out of school and into college the goal changed. It was time to look into something meaningful to do and catch up on whatever was missed.
The International Award Programme was brought to my notice by a number of friends who had completed various levels of the programme. The difference in their approach, outlook and perception on matters of importance had changed significantly. They seemed confident, proactive, concerned and participative in all spheres of the society-social, environmental, political and economical. While one peer voraciously shunned plastic to favour the forest, the other seemed to enjoy the thrills of outdoor sports like paragliding and was now looking for avenues to train as an instructor. I could see a major transition in them from blindly following idealism to carpe diem-seize the day. It invoked in me a desire to look out of the box and in some ways to become more complacent like my friends. Since the opportunity of entering the Award at the school level had been exhausted, the open award centre, which had just begun, was a perfect solution. The programme followed by these centers was just the same. All five sections of the Award (if one was a Gold participant) had to be completed. The basic difference was the change in institution; instead of doing the Award in school one was now pursuing it in college or in a corporate. It was also for those individuals who belonged to the age group prescribed by the Award programme but due to certain circumstances could not carry it at the regular school level.
The biggest advantage that I felt in the open award centre was its non competitiveness coupled with a sense of achievement in each section. For the first time I was not competing with my school mates or with my peers. I was making a positive change in my life and that of others around me. In the service section I volunteered with a group called AWAZ with the aim of sensitising ordinary citizens about their fundamental rights through the right to information act 2005 thereby enabling them empower themselves by this effective tool. The RTI also helps to keep checks and balances on the working of the government. Unlike other modes of social service, this sector, I felt was the most neglected. Civil society today only stresses on promoting literacy among the masses but little thought is given in educating our people about their basic responsibilities as citizens or even imbibing them with a value system. Through this section I believe I have contributed in making the world a better place to live in and given back to the society what I believe I have taken from them. The adventure and residential projects were completed in the wild hinterlands of Russia.
A grand opportunity came my way through the International Youth Forum Seliger and the International meeting-Beginning of trust which allowed me a platform to interact and learn from the youth with a different culture and language. I was humbled to see the ease with which I was able to make lifelong friends across borders, those who I am regularly in touch with through facebook! The physical recreation section was one which brought rhythm into my life. Dancing to the nuanced form of Bharatnatyam I sought to re-establish my severed connections with creation and elements which form the very breath of life. It not only gave me a form of exercise but also helped me rejuvenate. I felt I was able to focus better on work after an hour of dance. Chocolate cakes, cinnamon cookies, noisettes or casseroles you name it and I could bake it! A year long course in the art of baking left me spluttered in batter, covered my nose in chocolate, broke that priceless borosil but equipped me with the life long skill of mixing different ingredients in the correct proportions to appease the taste buds.
The open award centre is, thus, a platform for those looking for creatively engaging their energies in discovering, confronting, enhancing, improving and enriching their abilities; pushing themselves to take that extra leap through different means thereby becoming self reliant, responsible and balanced individuals. The OAC carries forward the exciting challenge of the Award programme from school doors to magically transforming lives of young university students and corporate professionals. It is for anyone who seeks to look beyond the academic curriculum with an enthusiasm for learning something new and fun everyday!
Posted by Nivi Samanta - April 06, 2011