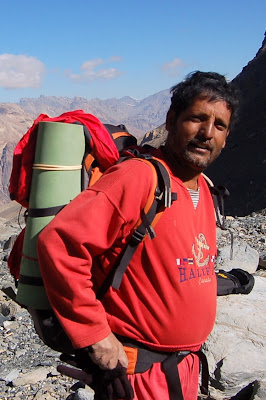 I was privileged enough to have known that feeling………..

It was way back in 1983, when my close association and passionate involvement with the mountains commenced, which marked the beginning of a new life.

I had just successfully completed all my Basic, Advanced and other mountaineering courses and passed out of the Nehru Institute of Mountaineering, Uttarkashi, with a Grade – A. The next few years that followed had been some of the most active years of my life, and in then in 1990, I suddenly came across a piece of news in a daily which said that an Everest Expedition was to be organized in August, 1991, which was to be the first ever attempt by the Indians through the Tibtan side via Central Rongbuk Glacier crossing the Great Collier Route. I knew this would have been a great challenge, as only one climb by an Australian has been successful via this route, and that too without a Sherpa.

I knew this was the moment of my life, and I had to be on the list of team-members for the Expedition o the highest peak of the world, the dream for each and every mountaineer in the world. I started preparing for the selection from the very next day. My preparation included three distinctive parts wich I had to pursue simultaneously; the first one was of course physical exercise, a vigorous self practice each and every day without fail all through the year irrespective of the season, weather or month. I was so determined and focused that I never ever changed my daily routine which consisted of exercises from 4:00 am to 9:00 am in the mornings and 3:00 pm to 7:00pm in the afternoons. My second part of preparation was to often go to the high mountains for climbing practice on different terrains. And the most important was the third part --- Mental Preparation, because what one really needs apart from mental fitness is an incredible amount of stamina and physical fitness. I had to be determined and confident and I trained my mind to accept any sort of challenge. After a year of focused and thorough preparation, I appeared for the selection process and I was an Automatic Choice to be on the expedition team.

After the team selection, detailed route mapping, and all other planings for the expedition, we were to go on a Conditioning Camp. One of my bosom friends was also a part of the team, who was met with an unfortunate and tragic death during the camp in West Sikkim at an altitude of 14600 feet, which was a big blow for me. His body was rescued after four long days.

After the Conditioning Camp, before the final Expedition, I was selected as a Climbing Member owing to my persistence and consistent performance and I was also given the extra responsibility of being the Equipment Officer and Transport In-charge, and then apart from just climbing, I had to be accountable for tons and tons of load including various kinds of equipment required for climbing.

Unfortunately the expedition that I had worked so hard for, for such a long time with dedication, had to be called off after we had climbed upto the altitude of 7400metres. The Expedition had to be abandoned as we were already facing the difficulties due to lack of manpower, and the weather condition was extreme; the biting cold was proving to be fatal for us owing to the uge deposition of snow around the White Limbo region. As a lead climber I was stuck at a height of 20000 feet for a stretch of 40 days facing not only the abovementioned adverse conditions but also several Avalanches, narrowly escaping each one of them, fighting for survival, fighting for Life.

This expedition gave me a huge exposure, that’s true, but the fact that I lost my friend still pricks me like a fresh wound.

Then in 1993, I got selected again as a climbing member for a 7-member team for an expedition via North Col, East Rongbuk Glacier. Even this time we were the first ever Indians attempting via this route. This post-monsoon expedition was the most memorable of my life, which started with a good note when I had become really popular among the Yak drivers. They used to call me “Yek-Pu-Du” which meant a “good man”.

Also, the report of the Medical Officer for the Expedition was a real welcome for me. It read: “During Indian Everest Expedition in 1993, Mr. Bibhujit Behary Mukhoty, One of the fittestmembers,maintained a steady resting heart rate of 64/min throughout the expedition. Under extreme conditions he should be the last one exposed to the effects of Erythropoietin, Heamatocrit and Hemoglobin Concentrations and excessive polycythaemia”

But this was a tough route and a tough expedition all together, and as a leading climbing member, I had to stay above Advanced Base Camp on a high altitude of around 19600 feet at a stretch of 56 long days. I kept on opening routes upto 8200metres and established Camp IV without oxygen on the Yellow Band which is a feature at an altitude of 27000feet. On the way to North Col, I opened quite a few routes together with the famous Roskealy, the 1st American to climb Mt. K2, and Jim Wetaker.

26th September, 1993 was a nightmare. Our whole team was just on the verge of being washed out by a major avalanche of powdered snow. It was a huge challenge against Nature and we were almost on the verge of death. But this incident didn’t dampen our spirits; we reopened the destroyed route on the very next day and on the 29th we had already established Okapi North Col Camp. There we sheltered a really distressed Mr. Jhangmu, Sherpa from a british team, in our already cramped up two men tent where including the Sherpa we were now four members. Also we had a tough time sharing water at that altitude because of the fact that at this altitude, it took 4 to 5 hours to melt just One litre of water to be obtained by melting snow.

At that camp, 3 members of our team, including me were stuck for 2 nights and 3 days, i.e. from 31st September to 2nd October in d midst of an extreme weather condition marked by a wind-speed of 140 km/hr and a temperature of minus 45 degrees. To add to this, my two team members were affected by frostbite on both hands. It was now my call, and of course I chose the Life of my team-mates over the summit which was just a few metres above. I had already lost a friend on the mountains on the trail of Everest, I didn’t want history to repeat itself no matter how close I was to achieve my ambition.

And then began the most difficult part and the most memorable part of my expedition. I had a tough time rescuing the two casualties. I had to evacuate them, because the only way to save them was to lose altitude before situations went out of hand. Owing to the fact that he weather was already terrible, I had a really hard time to carry out the exhausting task of fihting the North Wall for 15 to 16 hours, and rappelling down 2500feet each day all by myself. I just had to save the two members whose conditions were worsening every hour. On the way down, at some point, I was so exhausted without rest fighting the mountain, fighting the weather, that I could go on no more, I could think no more, I had given up. And then when I couldn’t even feel that I was alive, i miraculously saw my Mother, standing, waiting for me to return. And that was the turning point; I suddenly felt a rush of energy, and there was no stopping me since then. I came down just in time to save my two team mates, who were by then in really bad shape, but yes they were alive.

Of course the Expedition was called off by me; but I wasn’t even a bit sad this time. I had saved two Lives, and that was an achievement which I think is far more important than summiting Mt. Everest.

Most mountaineers feel it’s a combination of a number of things like love of adventure, and travelling, apart from the adrenaline rush of conquering a difficult terrain like a mountain. “What one really needs apart from mental fitness is an incredible amount of stamina and physical fitness,” says Bivujit Mukhoty, who has been a part of two expeditions to Mt Everest. And that requires months and years of training. “Mountaineering may be popular here, but it’s still not as popular as in the western nations. However, I feel we make better mountaineers, not because of our passion but because of our attitude. For western teams, it’s summitting that comes foremost even if it’s at the cost of a member, but not for us. We would never leave a team member behind to scale a peak, human life is far more important. On both my attempts I had to turn back, once only 600mts from the peak, when my team members fell ill. Yet, I don’t regret it,” says Mukhoty emphatically.