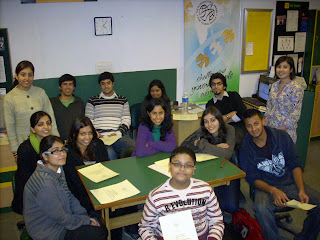 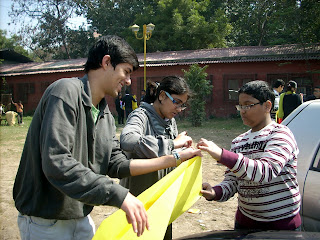 Divyangana with her take away from the Workshop held on February 20, 2010.

Ever wondered what NAOME stands for? No, it is not Naomi Campbell re-crowned as the queen of her profession. The word, officially introduced into my Award jargon during the Six pathways Workshop is an acronym devised by the Trainers to assist in the training of the young Award leaders at the National Office. On the morning of 20 Feb, this five lettered scribbling on the white board brought an eerie silence of the training venue with inquisitive whispers and later loud laughter. For us, all Volunteers who were once strangers but now colleagues and friends this word was a perfect icebreaker.

The primary concern of the Award is the development of a healthy society by engaging young people in positive activities, thus imbibing in them a sense of value. Emphasis is on holistic learning imparted by encouraging innovation, creativity and entrepreneurship. Education is not restricted to the four walls of a classroom but is an ongoing process that knows no boundaries. The Award’s Adventure partner, INME clearly demonstrated the imprints of this iconoclastic thought process with their training session.

Through a simple yet head scratching exercise (I mean literally), we witnessed the innate propensity of the human mind to solve any challenge at hand. Divided into three groups, we were assigned the task to engineer a mechanism using household items such as clips, chart paper, cello tape, balloons and a thread that could cushion two eggs, thus preventing them from breaking when dropped from a 50m high building.

Sounds easy, but believe me when I tell you that it took each group at least half an hour to come up with durable technology that they hoped would sustain the fall. The most resourceful, in one of the groups was a fourteen-year-old boy who directed and executed the assembling of a paper plane cocooning the two eggs. We all followed Sidhant’s advice very attentively! While some of us tried to utilize the majority of our grey cells, some like me did the physical work of cutting cello tape.

As we took our ingenious designs up to the fifth floor to be tested, many of us were apprehensive about the success of the childish creations that looked like a lopsided paper jet plane carrying the burden of two eggs. But unbelievably- None of the eggs broke! I had to share my prize with each of the two teams.

The exercise taught me an important lesson, never to undermine one’s capability or that of others while working as a group. Great teams use this simple philosophy of focussing on the target at hand, chanelising creative energies together to completing the goal. You succeed as a team and not as an individual. This experience brought us face to face with the struggles of larger multinationals and knit us together as a team somehow.

We trouped back into the training venue and got to know the true meaning of NAOME. The Workshop was designed to build an Award support team by strengthening the capacities of the young leaders, assessors and supervisors of the Open Awards Centre, thereby ensuring a quality delivery of the Programme. NAOME is essentially a way to remember the strategies every Award Leader must possess to effectively manage the administration of Award.

The rosy red ‘N’: stands for the needs of our Award managers and leaders. Where do they operate and what kind of knowledge or skill do they possess and impart.

The regal blue ‘A’: stands for the Aim written in the trainer’s perspective. The aim of each supporter must be raising the standard of delivery of the Programme. The moment this is done we can easily make the “International Award for Young People”, the Programme of choice for the Indian youth.

The tangy orange ‘O’: stands for the objective of each Award leader/manager measured by their intent and end result of their hard work.

The fluorescent green ‘M’: stands for the method adopted by the Award support for achieving their objective.

The pale blue ‘E’: stands for evaluation of the training course. Award leaders can determine this by critically evaluating the content and their process of explaining to the youth the basic philosophy of the Award Programme.

As we move ahead to help the Award in India grow multifold, this Workshop certainly equipped us with crucial information to look out for while reaching out to participants to engage them to challenge themselves further. In addition, the introduction to the Six Pathways and the session after allowed us to identify our skill sets. As we proceeded to map out a performance plan for the next half year as a team, we felt energised and enthused to take on the hurdles together.

Aim of the Six Pathways Workshop

Volunteers are the heart and soul of the Award Programme and the Training Workshop held was aimed at training every volunteer to be excellent leaders, have focussed roles as per the Six Pathways and be committed to taking the Award Programme to as many young people as possible.

It is the main responsibility of an Award Leader to maintain and uphold the philosophies, principles and national policies of the Award. The challenge and overall objective of every Award Leader is to effectively manage the Award within the licensed organisation, encourage young people to participate and to enable every participant to experience a Quality Programme. At the same time, it is imperative that all Award Leaders work together in a team.

Every successful organisation has specialised roles set for its personnel. The Award Office is responsible to follow the Six Pathways to ensure an overall development of the Award Programme to become the Programme of Choice for young people. The Six Pathways include quality assurance, developing partnerships, raising the profile, extending the Award, raising support and strengthening the structure.

Award Volunteers are active supporters of the many projects ongoing and have different interests of specialisation. The Six Pathways helps bring structure to their roles and the Workshop allowed the Award team to have well-defined role profiles as per their skill sets. The Training and Programme teams will now specialise in Quality Assurance and Extending the Award; and the Alumni and Communications teams are now responsible for Developing Partnerships and Raising the Profile of the Award Programme.

This Workshop succeeded in helping the young leaders identify their core competencies so they can now focus on their specialised areas to strengthen the structure of the Award in India and help raise support. A committed, enthusiastic and specialised Volunteer force will allow us to win hearts everywhere!