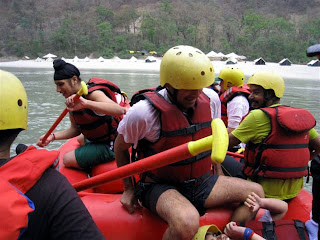 With a lot of apprehension and excitement mixed, nine extra-ordinary young people and two attentive teachers from senior school took on a journey along the mighty Ganga to discover the magic of this river that supports a largely agrarian and populous country, India.

The trip was an endeavour to:

-To realize the meaning of a jungle, when all one had seen was a ‘concrete jungle’ of urban city dwellers

- To experience the warmth of a friendship in the cold settings of Chirbasa, far-away from the buzz of Face-book & Twitter,

- To enjoy, India to its fullest, with its heat and dust; its teeming millions; its street-food; its amazing faith in infinite gods and its resilience which makes it a survivor in the world.

- To venture along the course of a mighty and holy river while exploring one’s own personality and traits.

From the sheer heights of 11,000 ft at Chirbasa, to the deep trenches of faith in Benaras, we saw a living showcase of majestic India. The Ganga team charted out an itinerary which began at the New Delhi Railway Station and ended at Rishikesh, which gave us a taste of the jolts and jostles of the “Great Indian Railways”. During the train ride, we got time to reflect and imbibe the changing landscapes from our windowpanes. We saw not just geographical diversity but cultural diversity as well.

Our camp at Rishikesh, was the perfect setting to introduce us to the river, the heat of the plains, the mass impact of tourism especially of the weekenders and gave us the time to gear up for the long drive to Harsil, the next day. Harishila, is the land, where apparently, Lord Shiva, turned into stone, hence the name. We actually camped a few kilometers ahead in a picturesque little settlement, Dharali. We thoroughly enjoyed the wooden houses in which we stayed and loved the fact that we could stroll around an entire settlement in minutes, by the time, our favourite ‘maggi’ was dished out by the local restaurant! The onward journey was a ‘test’ in itself. The smarter you were the lighter was your bag! We forgot the definition of ‘comfort’ and indulged in the basic functions provided by them, which included frugal meals, a hard wooden bead with no pillows, a bucket of warm water to keep your sanity even as you swore by your hand sanitizer just as you left the city limits!

The next day cleared up with great sunshine, as if our group was destined to take off to Chirbasa at the height of 11,000 ft above the seal level. The trek to Chirbasa was beautiful in every sense of the word. Glacial and riverine features; picturesque pine and deodar trees; the gurgling waters and the lone trekker from a far-away land kept us wanting for more! Once in Chirbasa, we camped in the wilderness and listened to tales of ghosts on the banks of the river, only to wake up the next morning to a ‘mind-blowing’ sight of a snow covered landscape.

On our return to Gangotri, we engaged in community service, for the forthcoming pilgrim season. The trip started with strangers strolling along the corridors of our school but while taking on the shovel, clearing the pavements, lining up the floor tiles and working alongside the labourers we could see the formation of an efficient team.

We came back to Rishikesh, and the sight of our camp, the promise of body-surfing and rafting, gave us the much needed ‘adrenaline rush’. We completed our rafting session with the savouring of the tangy local “ sev” served on the banks of the Ganga in small table tops on tripods.

Banaras, our next destination, brought us close to the faith of Hindu India, which keeps the city going, even as it decays in terms of its infrastructure, sanitation and general law and order. We then took an evening boat ride to witness the ‘spectacular yet humbling’ aarti and it was such a joy of seeing humanity congregate on the banks of one of the holiest rivers of the world. The morning boat ride revealed the dark secrets of the city, which we couldn’t see at night, the polluted waters, the crumbling facilities on the banks, the ever-expanding tourist network , all pointing towards the burden of a city, which a river continued to take-in for years without a whimper, and still does.

Question arises: Till when we will sustain this pressure on our Natural resources? Is it the alternatives, which we are seeking to fix this situation, or are we seeking a change in my ‘mindset’, in our ‘lifestyles’, which will free the river from its shackles? The questions were many, but the answers were nowhere to be found.

The quest continues even as the trip ended. Today, as the stories of the trip do the rounds in the corridors of Pathways, we hope that this is the beginning of a new endeavour by the students and the faculty, to learn, work, play, think and LIVE. This exposure to the hinterland of India is here to stay and will grow from strength to strength, year after year.