"My Summer was EPIC": Shubhda Hirawat-Gold Award Participant, Award Intern and University Student shares her experiences from the Summer 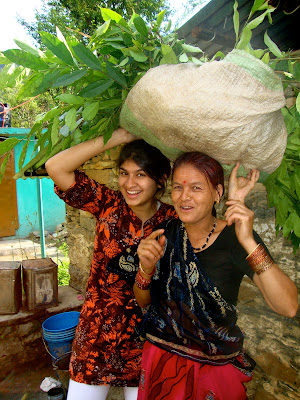 This Robert Frost quote very aptly summarizes my summer. Being a student of Business Studies in Delhi University, interning at larger-than-life corporates for the summer is a trend, the road taken on mostly. This time I decided to differ . Through Grassroutes (www.grassroutes.in) I took a road trip for social change to Avani in the Pithoragarh District of Uttarakhand for over 4 weeks and that has “made all the difference”

Since I started doing the Award , it has almost become like a valid excuse for doing things I wouldn’t have ever thought of doing or wouldn’t have been permitted to do ! Spending a month in the hills working on Community Health and Hygiene with a concentration on Maternal Health and Nutrition.Learning about rural health has been an experience for me whose lived all her life in the glam of the city Delhi.The closest hospital ,rather a small health centre is a minimum 2 hour trek through the hills and imagine a pregnant woman walking to this centre .I worked on the documentation of traditional practices and medicines whose need increases manifold given the harsh living arrangements . I think my biggest learning has been “People”.The graciousness and hospitality of Indians moved me. Inspite of living in dilapidated houses ,empty bowls for grains and tattered clothes and barefeet, the villagers never failed to offer the standard Indian guest serving of “Chai”.Not even once. Happy faces welcomed me like home.

Apart from this, I had the opportunity to learn hard skills like welding and drilling. I nearly mastered the art of drilling because of which I was the mechanic for drilling to eventually make a solar geyser and its panels. I also understood the chemistry of organic dyeing and pigment making . I accomplished my teenage fantasy of Beekeeping and when I say the bees don’t sting ,I am not lying !

I am now back in the heat with a sore back, dyed clothing,bruises and insect bites but it has been all worth it for the summer that it has been .This summer has been my best so far and its because of the Award ,which is always a push factor in following what you like doing .