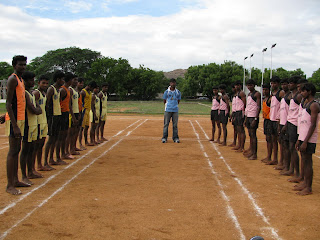 A Gold Award holder, Award Leader, Co-ordinator, Social Innovator,International Award Ambassador, Asia-pacific regional intern are accolades that define his life today, were just a string of unconnected words a few years ago for Dinesh Gajendran. Today, as the second Asia Pacific Regional Intern for the Peter Cruddas Social Innovations Initiative, Dinesh is working to showcase those Award Holders who have used the experiences from their Award to change lives of others in their communities. Read more to see how the Award allows young people to engage in Communities and be RECOGNISED at the highest level for their leadership.
Way back in 2007, when I chanced upon a newspaper article on Youth Exchange Programme, I did not realize that it was going to change my life. When I signed up for it, little did I know that it would be a turning point for my future endeavours in social development.
I started my Gold Award journey in 2007 from Chennai and spent a lot of time with South Zone Award Authority as part of the organizing team for Award Leaders workshops, Indian Special Projects in . The Indo Mauritius Youth Exchange Programme was another eventful journey. A Masters in Business and Administration (MBA), from the Madurai Kamaraj University, helped me become a better organiser of events.
For the Gold Level I had to engage in several activities for Skill, Service, Physical Recreation, Adventurous Journey and Residential Project. For the service section I started teaching Kho-Kho, an Indian sport to the children from an under-privileged community in southern Tamilnadu. As I was already a national player for the same sport and also a coach for the state team, I was able to impart personal experiences to them. It also gave me immense satisfaction to know that I was able to help these children for whom education was just a dream. Dreams come true one day if you pursue your passion. I fully realized the meaning of that maxim, when the team I coached won the state championship and the children were given an opportunity to pursue their higher education. This experience gave me the confidence to start the Audacious Academy for Sports and Social Development endeavours in social development. (AASSD) with focus on training young people from the rural areas in basic sports like Kho-Kho.
I was recognized as a Social Innovator for the Peter Cruddas Social Innovation Initiative (PCSII) 2010. This helped me get a direction to achieve my goals. Through the Award, I was able to carve a path for the rural students also bring out the stark realities and challenges these students faced.
Post PCSII, I represented as an International Award Ambassador in the Beyond Sport Summit 2010 at . My rural sports initiative received great response and won specially selected Best Entered Project 2010 for the UNICEF Sport for Education Award. I felt proud to be the youngest delegate in the group of all decision makers in the sports arena. Participating in the Beyond Sport Summit I got the vision to transform an initiative into a well-structured organization. Audacious Academy for Sports and Social Development (AASSD) today has a vision to develop projects that use sports and the Award Porgamme for development to deal with peace, health, environment, education, and social inclusion in rural areas.
Posted by surabhi - September 17, 2011