Take the Lead-Israel Youth Conference 2011: Meet the India delegation and hear the experiences

ABOUT THE ISRAEL YOUTH CONFERENCE 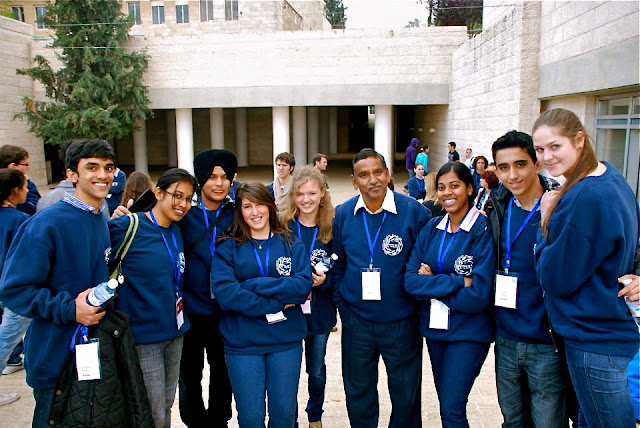 Organised by the Youth and Society Administration at the Ministry of Education of the State of Israel,  as part of the 2011 UNESCO International Year of Youth, The International Youth Conference with the theme "Take the Lead" was held from 20th to 23rd November 2011 in the Hotel Leonardo Inn, Jerusalem, Israel.
The theme of the conference was based on Janusz Korczak's quote: "Children are not the people oftomorrow, but people today. They are entitled to be taken seriously. They have a right to be treated by adults with tenderness and respect, as equals. They should be allowed to grow into whoever they were meant to be - The unknown person inside each of them is the hope for the future."
The focus of the conference was on promoting youth leadership and volunteer activities; establishing of the platform for dialogue between youth as the potential future leaders and preparing them to act as good will ambassadors of their countries, providing a meeting point for youth from culturally diverse communities, living in harmony and peaceful coexistence.
There was representatives from 13 countries round the world- India, Thailand, Singapore, Russia, The Netherlands, USA, UK, Germany, Austria, Croatia, Italy, Kazakhstan and Israel. The Israelis who formed bulk of the representatives were mostly 17-18 years old and the participants from the rest of the countries were slightly older than them-most being around 19. 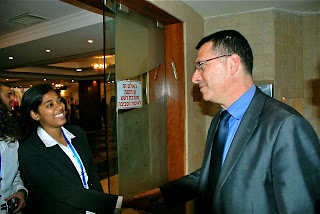 Lectures and more:
The
was declared open by the education minister of Israel. Anwesha Gosh
gave a speech introducing the Award Programme in India and discussed the Indian leadership aspect.
Anwesha is convinced that doing The Award helped her speak at the Opening Night. She says that she was '
a little apprehensive' before her speech as she did not have a speech ready. But at the back of her mind, she knew that she would do well. 'I had so much to share, so much to speak about from all the experiences through the Award- my difficulties, successes, failures and how the Award gave me an opportunity and confidence to carry on despite the failures.'
The delegates attended panel discussions and lectures by Mr.Yacov and Dr.Yassi Harel.
These lectures proved that each idea and its implementation could be beneficial for the society.
On the second day, all the participants were divided into 4 groups. India was in the first group with Germany, Thailand and Israel. Everyone participated in a round table discussion to understand policies and issues concerning youth leadership. Through discussion they found out the kind of leadership activities that everyone was a part of and also tried to understand what more we could do to make the world a better place.
The first lecture was on leadership as a basic skill and quality, and the problems faced by young leaders who are trying to bring a positive change in the society. Conducted by Dr. Yassi Harel-
the head of the study team conducting research of child and adolescent behaviour.He shared his experience with us and explained the methods of study.He also throw light on the risk factors  concerning the youth.It was interesting to know why and how behaviour of the youth of today is changing.He told us what we could possibly do to give others a better life.
The second lecture was on an initiative taken by
Mr.Yacov- the founder of the first Democratic school in Hadera (read more about them http://www.democratic.co.il/en/schools/democrats/),
to encourage learning and creativity in the society through his “Democratic schools”. 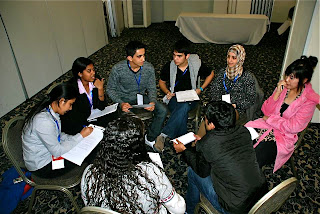 Says Anshuman, "Through the discussions I learnt a great deal about the diverse culture and more importantly the different views and approaches of people to the common social problems. The conference also made me realize the similarities between the youth around the world. Most of the delegates took up projects and worked in synchronization with the government. Most of the youth involved had taken up leadership responsibilities through the youth councils formed in their respective countries. I also felt that any such initiative lacked in our country and was only possible at school level because of India’s large size and other social problems."
On the third day, our groups were further divided into sub-groups to formulate  the declaration for the conference at the end all the points were taken in for the general statement. T
he declaration defined the goals of the conference and what the delegates pledge to do
. Everyone contributed their ideas and shared their opinion of the declaration. The final copy of the declaration was ready after a lot of debate. However much we fought over the points of the declaration-everyones concern for the world and the society was clear. It become obvious that every participant of the conference wanted to do their bit for the betterment of the world.
Onkar says that the cultural night was a fun experience in which all the delegates showcased different traditional dance performances and spoke about their country and showed video clips. 'Team India did 'bhangra' (a dance from Punjab), spoke about our country and showed a short video clip of incredible India. It was great to witness all the performances and 'bhangra' was enjoyed by everyone and every body joined in!' 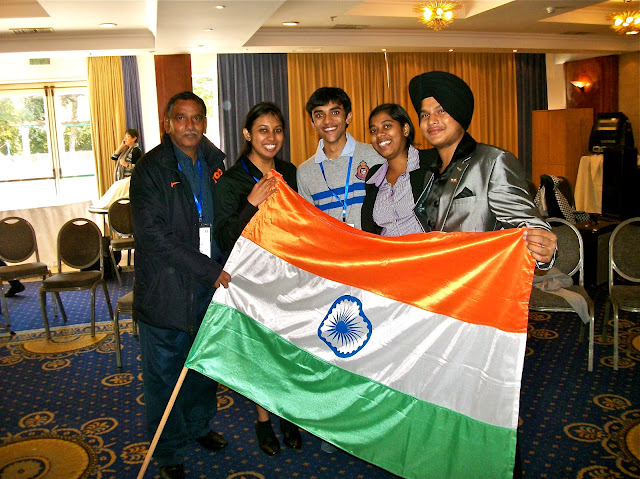 Known as 'The Holy Sanctuary', Jerusalem is the centre for three major Abrahamic religions- Judaism, Christianity and Islam. Although Jerusalem is known primarily for its religious significance, the city is also home to many artistic and cultural venues. The houses here are made up of similar kind of brown rock-which gives the city a calm and uniform look. The beauty of the country is mesmerizing. The city is connected by broad roads and trams. What was surprising was the tram which is also called the ''train'' in Jerusalem is free of cost.There was no police supervision anywhere on the roads but still the traffic ran perfectly-something very impressive.
Onkar enthusiastically shares that "Israel, Jerusalem was quite different from what we see in our daily lives on the newspaper or on the news. The youth body is very very active in israel, each district is represented by a student leader and the chairperson of the israel youth association represents them in the parliament."
Adds Anwesha, "While touring the land of Jerusalem and Israel, we saw the rich culture and history of the land. Jerusalem was destroyed three times and all the three times that it was rebuilt, it opened it doors to new cultures and practices. We visited the Knesset - the Israeli parliament, the Museum which is called Yad Vashem , the City of David, the Western Wall- I realized how close the people were to their history.Their knowledge of the past was astonishing. What was more astonishing was the amount of effort they had put in to preserve their past. All documents from the Second world war, from during the rule of King David and every other piece of history that was available was there for public viewing and explanation."
Experiences unplugged: 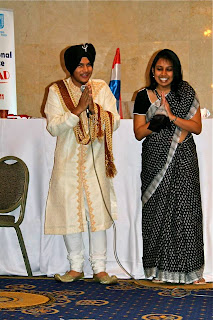 Award India team enjoyed meeting so many young people from diverse cultures,different religions, representing their countries. They realised that in spite of the differences, all delegates shared same concerns about youth policies, youth leadership and more.
Says Anwesha, "Although we were different, we realised we were the same. We had similar concerns. We could all connect to each other on similar issues or points. We all agreed that is it easier solving problems through discussions than by violence. Just hearing each other out helped us sort out issues. The International Youth Conference was an amazing platform to share my experience and opinions with the rest of the world.I learned a lot in the process and made friends from different countries. I could like to take this opportunity to thank the Award for providing me with such an unique opportunity."
The delegates agree that participating in conferences as The International Youth Conference in Israel, young people get a chance to share their experiences and opinions with the rest of the world in addition to making friends.
Anshuman agrees, "we came back with a lot of learnings and ideas to think about. It was an opportunity for us to learn about the levels people from other countries were working for the betterment of the society. It has allowed me to think about some of the global issues and critically evaluate the work been done in such areas."
Onkar agrees and adds on that, "we realised the importance of good leadership and learnt how to be better and effictive leaders instead of only being active leaders. We also learnt how to respect the ideas of every individual even if it is different from ours." He added passionately that The Award Programme is the best platform for young people to lead in what they believe in.
We still wait to hear from Rashmi who has just returned to her office.
MEET THE INDIA DELEGATES SELECTED FOR ISRAEL

Anshuman Bhargava- Gold Holder 2011
A student of The Doon School, Dehradun, Anshuman is passionate about basketball and art. He is a member of the Trophy Squad in his school as part of his Service.
Anshuman believes that participating in social projects has allowed him to see the true problems in India.
He wanted to attend the Israel Youth Conference to become a leader, make new friends and contribute to The Award in India. Ass an Ambassador at the Israel Conference, Anshuman looked forward to presenting his views as a potential youth leader, represent the country’s spirit and interact with culturally diverse youth.

Anwesha Ghosh- Gold Holder 2011
A first year College student and a resident of Kolkata, Anwesha enjoys oil-painting and sketching, her Skill for the Award. She is also a Football player and knows Karate. A dedicated Volunteer in  awareness about the importance of literacy, she  is also a mentor and supervisor for young people.
Anwesha believes that the Award Programme has helped her understand the needs of others.
She strongly feels that being as an Award India ambassador, she will get to know how different communities work better and work towards a common goal. 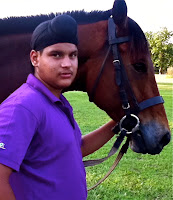 Onkar Singh- Gold Award participant
A student of the Assam Valley School-Tezpur, Onkar is skilled in Electronics media and is also regularly involved in Horse Riding. Apart from his hobby and physical exercises, he also loves the mountains and trekking up to Sandakphu, the highest point in Bengal, has been one of his memorable Adventurous Journeys.
Working with and helping the residents of the Moran Blind School is a passion of his which is a part of his Residential Project.


Onkar believes that the sharing of ideas during the Conference in Israel is really crucial for him because with the new ideas and experience, he would be able to deliver better services and results in his school as well as to the Award Programme itself.

Rashmi Rajamanickam- Gold Holder 2010
Rashmi currently works in Chennai. A skilled dancer in Latin American Dance style,  a  State Level Yoga Contest winner, a Table Tennis player and also a Track & Field enthusiast in  Shot-put and Discuss Throwing, Rashmi wears many hats really well.
She is active in Community Service that include helping run an Orphanage and organizing regular Blood-donation Camps. She also loves exploring Caves! As part of her Residential Project, Rashmi conducted a survey on the single mothers in a few villages.
As an Award Ambassador to Israel, Rashmi wants the world to get a right perspective of India, and meet young people from all over the world at an international platform.
Posted by Nivi Samanta - November 30, 2011