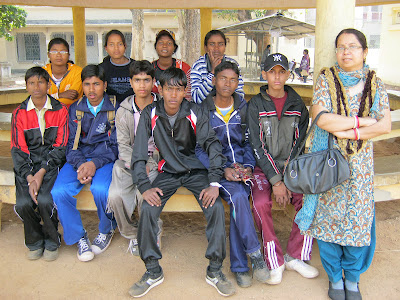 Shantiniketan is a small town near Bolpur approximately 18o kilometers away from Kolkata.It was made famous by Nobel laureate Rabindranath Tagore whose vision  became what is now a university town which is also a major tourist attraction in Bengal and our destination. Rabindranath lived here and penned many of his literary classics and his home is a place of historical importance.
Our educational tour convened on 15/01/2012 and we were a team of 28 members consisting of 26 students and 2 teachers. Most of the students were Bronze level awardees and many of them did not have the opportunity to travel by train earlier. We reached Shantiniketan at four in the evening and were shown into our rooms which were booked in the Youth Hostel. We were given an hour to freshen up after which classes were conducted on mountain manners, country code, teamwork etc.
Day 2 started with trekking to the banks of the Kopai River.  We had the opportunity to see the market place of Shantiniketan. One particular thing I noticed that the names of the shops in some way referred to Tagore and his works. Names of the shops were Geetanjali Sari shop, Sonar Tori jewelers etc. Shantiniketan has schools which are modeled on the ancient gurukul system. We saw that classes were being conducted in the open air amid green surroundings. Another noticeable feature of shantiniketan was that there was no hustle and bustle of vehicles; signboards forbade people to use horns or to drive at speeds in excess of 20 km/hr. The place truly justifies its name shantiniketan or “abode of peace”. We reached the Kopai River, which did not have much water as it is only rain fed. We saw some statues made by famous sculptors along the banks of the river, which were so lifelike.
Then we visited the Vishwa Bharathi University it's symbolic meaning being defined by Tagore as "where the world makes a home in a nest". We learnt that the aim of this educational institute was the quest for truth, blending the methods of learning of the East and West. Visva Bharati, now more than a hundred years old, is one of the most prestigious universities of India with degree courses in humanities, social science, science, fine arts, music, performing arts, education, agricultural science and rural reconstruction. We were unfortunate to see Rabindranath Tagore’s house only from outside as tourists are not allowed to enter the house or to click photographs of  the house after the theft of the Nobel prize. We were lucky to see a famous sculpture of a santhal family by the great artist and sculptor Ram Kinkar baije, who himself was a santhal.
After luncheon we paid a visit to the Netaji club, where our instructors from ICNL (Institute of climbers and nature lovers) taught us the basics of rock climbing. The club had an artificial hillock which I must admit would have been difficult to climb without the help and motivation of our instructors.
We returned to our hostel and the children were given the responsibility to cook dinner. Ravenous as we were from a hard day’s work, we found ourselves gorging on chicken, baigan ka bharta and rice after which we retired to our beds.
Day 3 started with physical training. After an hour of exercise our instructors taught us the rudiments of pitching a tent. We then visited SRIJANI, the Shilpagram Complex of which is a unique cultural centre provides a conducive environment and infrastructure to nurture our traditional arts and crafts. The complex comprises huts. The huts incorporate traditional architectural features and design. The centre also provides Craft stalls, Art gallery, Patta painting gallery and Landscape Children’s Park so that the visitors of the Shilpgram will be acquainted with the rare, ethnic and vanishing art forms of the country.
We then came back to our hostel and started preparing for the camp fire which went off smoothly. After which we had our dinner which was again self cooked by the students and then we retired to our rooms with a heavy heart. We had to return to our routine lives the next day.
It was an experience of a lifetime and I would like to thank the IAYP India National Office for providing us the opportunity to visit the “abode of peace”. Whatever I felt during the 3 days is inexpressible in words. Lastly I would like to thank  ICNL for conducting the trip safely.
KALYANI CHAKRABORTY, Teacher and Award Leader, Manav Vikas School