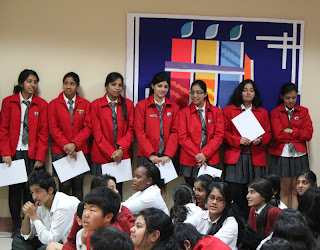 A little silver bird can mean so much...
3rd February marked the day us silver Award IAYP candidates were given our reward for a year of dedication, persistence and, most importantly, self realization. The unanimous feeling of IAYP was that it had helped each individual push themselves beyond their personal boundaries and helped develop the ability to balance cocurricular and academic pursuits.
As this was one of the largest batches to receive the Award, Mr. Sandeep Dutt, the IAYP National Director and Ms. Rekha Dey from the IAYP national office visited our school to give the candidates the Award. The ceremony began in its usual manner with our principal Mrs. Neeta Bali, who deserves to be thanked for her support in the IAYP initiative, introducing our guests and then proceeding to light the lamp. This was followed by a short video on what IAYP is around the world and subsequently the distribution of the certificates and badges to the candidates. However, sandwiched between these two events was the monumental occasion of our school being officially declared as an IAYP YES center. This means that our school is now equipped to handle IAYP candidates from other schools in the region.
As we dispersed, there was not only an immense feeling of accomplishment for having persisted for the past year, but also an overwhelming pride in being part of a school that has developed the IAYP programme to such a great extent in just a little over two years. And none of this would have been imaginable had it not been for our always-accessible school IAYP Coordinator, Mrs. Vijayashree Pahal. No amount of plaudits can express our gratefulness to her.
Rushil Mohan
- A very proud silver awardee from GD Goenka World School, Gurgaon