Who is a child and who is a teacher? Part 2

Yesterday five years old Amrita came home and opened her tuition notebook. She said, “Mother told to ask you to help me do this.” I looked into the book. Her tuition teacher had scribbled A, B,C,D…till L. She was supposed to copy it in the empty lines. I asked her, “Do you know this?”
Holding her breath, she said, “She just gives me to write. She doesn’t teach anything. (Likhati hai. Padati nahi).” For some time I was stuck. There was a truth in her message. The child knew there’s a difference between just writing and actually learning.
I wasn’t happy that I have to make her do something that she and I don’t like. Her mother was sending her to tuitions and I was being forced to make her do her tuition’s homework.
So I thought of making it fun. We started to sing – A, B, C, D…..after singing few times, Amrita started to dance; I asked her to do so. Sometimes like a bird, sometimes like a butterfly! But after her D, every time, she would said F,G,G….We sang many times, but it remained F,G,G. I was feeling irritated and was conscious that my irritation shouldn’t reflect on her. I didn’t want my irritation to touch her. That would be so much against the compassion, I practice! So we let it be F,G,G ☺
While taking out her eraser from her bag, Amrita’s money fell out – few one rupee, two rupees and a five rupee coins; she said, “I’m saving them. When I go to my village, I’ll give to my sister.” And then she told me that all her sisters (cousins) live in the village.
When that day her mother came to pick her up, she told me how Amrita doesn’t spend her pocket money. She said, “The younger one wants everything for herself and this one doesn’t want anything.”
Then she went about describing how she bought a Johnson’s baby soap for her baby brother. I said, “Amita, why did you not buy soap for yourself but your brother?” She became a little hesitant, her head bent down, a little embarrassed as if she didn’t like this being told, a little irritated. She said, “I already have for myself.”
An educator would understand this child has a compassionate heart and this becomes tricky when the younger sibling seeks attention. For parents start to draw comparison as Amrita’s mother has started to do and feel irritated with her younger daughter. She’s just not like Amrita!
Let’s get back to the homework. As soon as Amrita finished it, she said, “Yesterday you mentioned that we would draw my dad.” I said, “Ok, we’ll draw.”
“We’ll draw a flower also,” she continued. Amrita has been to school just for a month before the summer vacations and her teacher had taught her number digits till 10. “She has taught us to draw a flag and to draw a flower,” Amrita said. 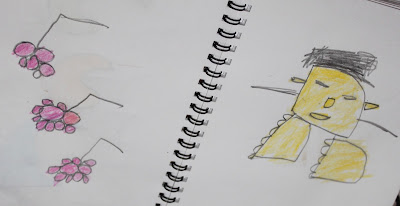 Amrita’s mother has never been to school and wants a better future for her children. Polio disabled her husband when he was a child. He now works as a sweeper and though the couple understand that the tuition teacher is not teaching well they have no way to identity that and help their child. Millions of parents in India are like that. They don’t know how to help their child as their world changes.
Amrita told me that the tuition teacher beats her. “She hits with a stick at the back. Bahoot dukhta hai (it hurts badly),” she said. Later her mother told me the tuition teacher is a middle aged woman with three grown up kids and at times, she makes her children teach the little ones and asks her son to beat up the little girls. I wonder how many children she would have mistreated like this in her life – how many wounds she would have inflicted on their psyche. Doesn’t it hurt her to hurt such tender, small children?
I handed over a cushion and a wooden big spoon to Amrita and asked her to show me how the teacher beats her. She put the cushion in front of her like a drum and beat it four times, the last one being the one when she raised her arm the highest and the strongest.
Trauma gets deep rooted in the psyche of a child, as much as love does!
The next day when Amrita came home, she had on her own learned to say E,F,G. I was glad in two hours she had learned through play all that the tuition teacher couldn’t teach her through stick. Next day I made her mother understand that Amrita has no need to go to the extra tuition class.
Before she left for the day Amrita said pointing at the lonely five rupee coin in her purse, “My mother doesn’t have bindiya. I’ll buy her one (sachet) with this. These days, she put a dot on her head with the nail polish.”
While mentioning this, her five years old face was intensely innocent, very deep in thoughts, concerned and sensitive about her mother’s situation.  She’s a child – observant, kind, and responsible. No one has taught this to her. An educator’s responsibility is to nurture it and strengthen it. Build her character on these foundations; teach her to rely on her strengths when her own fears threaten her sense of belief.
~ Venus Upadhayaya
Email: venusupadhayaya@gmail.com
Posted by SandeepDutt - June 18, 2016