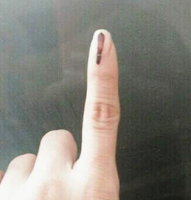 Corruption ruins the Economy at a state and national level and majorly affects the Democracy system of government as people are bribed to vote and more privileged are the private sectors and it increases the gap between the poor and the rich which can lead to a breakdown of war between the haves and have not. Corruption leads to the most alarming situation in the nation where uneducated people lead the nation which shakes the law and order of the nation and peace is at its danger.

Religious  Power politics encourage to vote on caste, race and religion which deviate the focus from the real issues of the nation that affects every individual life of the nation in every department. Religious Power politics are“ Blind Politics” that encourage people to accept the wrong, believe the wrong and do the wrong. It encourages people to fight and vote on the basis of caste, creed and religion blindfolded of the realization of its results.

“ DEMOCRACY IS REAL POWER WHEN LET IN HANDS OF JUSTICE”