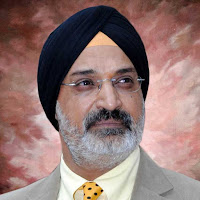 Dr Jagpreet Singh, Headmaster of The Punjab Public School, Nabha did his schooling and college from Ajmer. He is a Post Graduate in History and M.Ed. and Doctorate (Doctor of Literature). Dr Singh possesses 30 years of rich Administrative experience in the field of Education. He has been awarded the Best Teacher in the year 2001 by the Chief Justice of Rajasthan. He was also awarded the Best Teacher in September 2003 by the Lions Club, Ajmer and Eminent Educationist Award by International Institute of Education & Management, Delhi in 2011. In 2013, The International Institute of Education & Management, New Delhi has conferred the most coveted Rajiv Gandhi Education Excellence Award, for his achievements in the field of Education. Dr Singh has been awarded the Jury of the Derozio Award for Education and Human Enrichment by the Council of the Indian School Certificate Examination in January 2014.

Before joining this institution he was Vice Principal, Mayo College, Ajmer. His association with Mayo College, Ajmer has been since 1989 onwards till March 2011. He started his career as a teacher in 1986.
#HappyTeachers #BrewingKnowledge #SGEF19
Posted by SandeepDutt - June 28, 2019