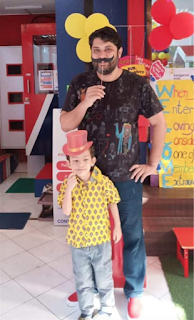 Research has indicated that the #Role of a #Father is tremendously important in the child’s development from birth through adulthood. Children whose fathers were involved in their education were found to get better grades, better verbal and problem-solving skills. They also were found to achieve better grades, achieved more in extracurricular activities and displayed higher tolerance for stress. Children as young as three were found to have better attention spans and lower levels of tantrums. Early research has also indicated that the earlier fathers became involved with their children's learning and socialization, the better...

Schools are encouraging ways of participation of fathers in their child’s early childhood education settings which are often children‘s first significant experience outside of the family.

Dads were invited for a day to the school to participate with their child and do fun, meaningful and impactful education activities catering to each learning style – visual, auditory, kinaesthetic, etc. For e.g. fathers and children were made to dance together thus appealing to a child preferring kinaesthetic mode of learning; fathers were made to paint with their kids appealing to visual mode of learning etc. Various games were played like threading beads, playing with blocks, solving puzzles etc. 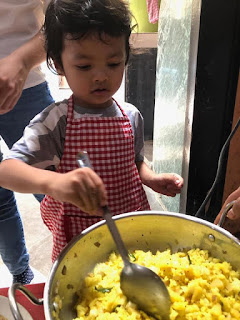 Dinesh Shetty, a senior software engineer with a leading IT company whose three-year-old daughter, Avanti goes to Kangaroo Kids Kandivali, said, “It felt wonderful. Although I try my best to spend whatever time I can, it is her mother who is more actively involved and getting an opportunity to spend time with her and see a typical day at school along with fun activities was like revisiting my childhood. I was amazed at the way the teachers knew every child – his/her nuances and that was very reassuring!”

The importance of having fathers involved in the child’s early education cannot be of more consequence than right now!

Rekha Shahani "While the role of a father is very important in a child’s life, it does not necessarily mean only involved in SCHOOL. It also depends who the father is. We find children confused because the thought process of both the parents differ. They see & hear their parents not being on the same page many times & it becomes difficult for them to understand us, adults. Today parenting is one new journey. I feel having both parents accepting the responsibility of bringing up the kid is more important than comparing the role of a mother or father.
When we were growing up the roles were clear. Mom a house maker & dad the man who went out to earn. Today both are going out & many tines the mothers have long working hours. So there are cases where dads spend more time with their kids.
It depends on situations & the choices today’s parents are making. "
Evolved males redefining fatherhood
With the inexorable disintegration of the traditional Indian joint family, especially in urban India, and rapid multiplication of nuclear households in which both parents go to work, male parents are increasingly beginning — American style — to share parenting duties and household chores – Mini P. & Cynthia John
June issue of Parents World shared courtesy Summiya Yasmin - Click here