'It matters not how strait the gate,

How charged with punishments the scroll,
I am the master of my fate,
I am the captain of my soul'- William Ernest Henley 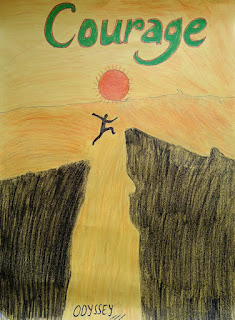 The auditorium roared with applause as the Chief Guest arrived. It was the Annual Day at School. The crowd of 600 comprised of students, parents, teachers and distinguished guests. After the noise settled down Martin, the Head Boy started the proceedings by delivering a welcome speech. His voice rang loud and clear keeping the audience enthralled. Being the Head Boy of the school, leadership came easily to him. He was an epitome of intelligence and flair. Martin's eloquence couldn't just be heard but felt. He spoke without abandon articulating emotions through his meticulous choice of words. Looking at him one could just be in awe of his gigantic stature.

Kabir was standing in one corner of the backstage fidgeting and biting his nails. The atmosphere did not excite him at all. Instead, it overwhelmed his mind and body. He felt his legs tremble in fear. the hand that held the script started perspiring as the seconds ticked by. Kabir was to introduce the Chief Guest that day and it didn't help a bit to know that the Chief Guest was none other than Mr Shashi Tharoor, a renowned politician and powerful speaker. Mr Tharoor's famous discourse at the Oxford Union pertaining to the injustice meted out to the Indians by The British colonialists and their obligation to pay reparations to India in the YouTube had been the constant topic for discussions among the students. As Kabir recollected the speech he felt his courage slowly ebbing out of him.


A loud round of applause pulled back from the reverie as Martin ended his speech. Martin then invited the Principal of the school to address the gathering. As the Principal started walking towards the podium, Kabir remembered the first time he was on stage.

It was 3 years ago. He was in Grade 7 and for the first time ever was participating in the inter-class elocution competition. He was frightened at the thought of standing and facing the audience on the stage. He was to recite 'An ode on a Grecian Urn' by Keats. The English teacher, Mr Sharma had worked really hard to prepare Kabir for that day. As Kabir walked towards the centre of the stage he felt all eyes on him. It suddenly made him feel naked and vulnerable. As he opened his mouth, a squeak emanated from his throat instead of words. The otherwise sombre auditorium erupted with laughter and hoots. Kabir could not go past the first two lines of the poem. Amidst more laughter and jeers he walked off the stage in utter embarrassment vowing never to be on the stage again.

The incident left a deep scar in his heart making him sure about his insecurities. He went back into a shell never to come out of it again. On the other hand, Mr Sharma tried persistently to pull him out of that abyss but to no avail.

Kabir, however, was a gifted writer. He composed poems, wrote articles for the school magazine and got lauded for his fascinating short stories and essays all the time. It was only public speaking that made him shiver. But Mr Sharma was relentless. He left no stones unturned to make Kabir overcome his fear. He constantly motivated him and made sure that Kabir took part in Talk-a-Minute sessions in the classroom to overcome his stage fright. As years .rolled by, he started gaining some self-confidence. Now, he felt sure that he was ready.

So a month before the Annual Day he had already prepared a 5-minute long introductory speech. He knew the words by heart and did not need the script but kept it out of old habits. But all that changed a  day before the Annual Day. As he rehearsed his lines in front of the class and Mr Sharma he seemed to forget everything. As he stood tongue-tied in front of his classmates, he turned towards Mr Sharma with a sheepish grin mumbling an apology. The ever understanding teacher patted his back and told him that it was okay to be nervous. He assured Kabir that he was ready but he needed to focus a bit and go about it with a little patience and oodles of courage. 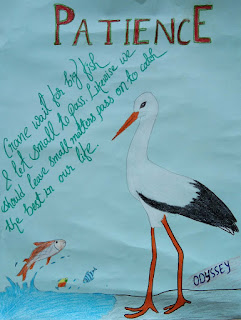 His train of thoughts was broken when he heard Martin call out his name. With bated breath, he walked on to the stage and placed his crumpled script on the top of the podium. As the black microphone loomed in front he felt the words on the script turn into ants and crawl out of the paper.


He looked up to see an ocean of people awaiting him to speak. His fear came back again. He cleared his throat and just when the familiar squeak tried to escape his lips yet again he closed his lips shut and took a deep breath.

This was his moment to shine and he was not going to give in to fear. Without glancing at the script, he started speaking. His speech struck a chord with the audience who sat enraptured hanging on to his words like a butterfly sucking out the nectar from flowers. Words afterword kept pouring from his mouth like a waterfall in perfect harmony. His hands moved automatically attuned with his vibrant speech. When it finally ended, there was a dramatic silence for a minute. Then the crowd stood up and gave him a standing ovation. He thanked the audience and was elated to see Mr Tharoor smiling encouragingly at him. Kabir's courage and patience had paid off in the end.