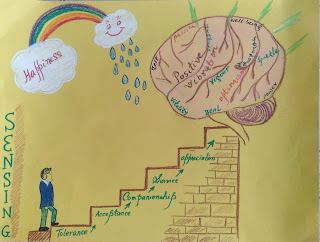 Our Road to Happiness

Her parents named her Madhubani. A sweet child of theirs, whom they put in Sacred Heart school for better education. Madhubani showed more signs of homesickness than other children. Our challenge was to tap on her sense of well-being and adaptation to hostel life, the first thing we did was to put her under our special counselling wing, to groom her for the “I feel GOOD Factor”. Constant chatting, venting and “It’s OK” refrain, started working wonders for her.  She began to smile. Her mental health was improving.

Meanwhile, we encouraged Madhubani to select Volleyball as one of her sports. She began to enjoy the sweating and smashing. The happiness hormones flowed through and she smiled more often. Her physical fitness soared. We discovered that she had become quite fond of swimming as well and chirpily looked forward to the pool.
Madhubani’s attention in the classroom has improved. So has her behaviour in the dormitory, which had so far been sullen and non-co-operative. The school has now become a pleasant experience for  Madhubani. 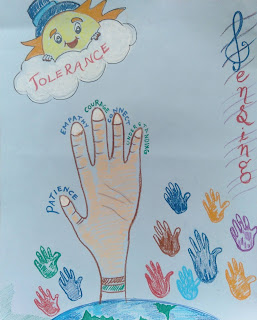 As a teacher, I have always faced situations wherein I have to teach students with mixed abilities. Very often, an altercation occurs among students due to their lack of understanding of the subject which is often due to their lack of interest. I remember that Ayush, a grade X student used to fall behind in his grades. He aspired to be a footballer and for him, academics came secondary.

Due to his low grades, the brighter students attempted to tease him and it became quite difficult to control his total lack of interest and negligence towards his studies. I also realized that he was not fairing to well in the other subjects too and had developed a kidney ailment. I felt the urge to help him. Initially, I could see his resentment but later on, he tried to respond and began to understand that education was a useful tool for him to ace his football skills.

I tried to take out some time to talk with him and to help him out. My conversation with him would start as – “Hi! Ayush……What did you do on the football field today?”  He often responded with a smile and on the days that he scored an extra goal or got a trophy, he would make it a point to tell me. I would coax him to write a composition on it.

Gradually we realized that in the process of helping Ayush overcome his resentment towards studies, how he had also been tolerating us. Thus the value of tolerance as shown by Ayush has become a guiding light for us. The realization that each child undergoes this phase has opened floodgates of tolerance in us.

It is a moment of pure joy, whenever my eyes meet Ayush’s and he smiles back fondly.