Gautam Mukherjee,  as an inexperienced and young school master, thought that all school teachers have the license to beat students for any indiscipline. 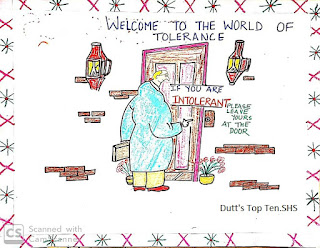 A student once came to his class without his homework and on the pretext of being a strict teacher,  slapped him without asking him for his reason of non-submission of work. In that class of 35 minutes, the student cried in the most heart-wrenching manner as the class progressed. At the end of the class, he called him aside and asked him the reason for crying so long. He explained- My father is a drunkard and has come drunk last night and had started beating my mother. In fear, then the student had hidden under the bed for the whole night and ran away from home early in the morning. He waited outside the school gate to enter the school when it reopened .

The incident was a turning point in Gautam's life. A student had come to the safety of his school, classroom from an abusive father. Surely a slap from a teacher was the last straw for the child.
He thanks God for the lesson on tolerance that he received from that day's incident in the class.

Mr Bismarck was working as a warden when he noticed that a student was depressed and unhappy for a long time. After spending some time with him, he understood that his father was on the verge of bankruptcy in his business and this was making the student anxious and worried. He advised him on dealing with this problem. After some days the student came back to him to inform him that he was no longer feeling depressed and sharing his problem with Bismarck was all that was necessary to help him. 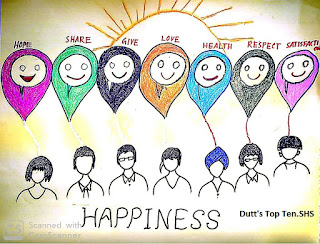 He realized that as a warden, sometimes giving your individual attention and time to your student is all that is required to create happiness.

Gautam, Joyce and Debasish teach Political science, the Primary School and Computers respectively. They feel that happiness can be created when we help our students achieve something more than what they thought that they were capable of achieving. Isha Mandal was a political science student who had never been able to score well academically. Isha was the happiest student that Gautam Mukherjee remembers in his teaching career when she managed to score 92% in her ISC exams through constant encouragement.

Similarly, Pawan Yadav is another happy face that Joyce remembers at the end of a school year when he was able to do well in all his subjects when Joyce could spend time with him all over the year to help him improve his score.

Piyush Pallav is another student in grade 8 who had not passed in Computers all over the year. A small encouragement in the form of a promise of "10 grace marks" in his practical exam if he managed to score above 20 marks in his theory was all that was required for him to work harder. Debasish remembers Piyush as the happiest student in his class that year when he scored 55 per cent - much beyond his own expectations when he had encouraged him to work harder.