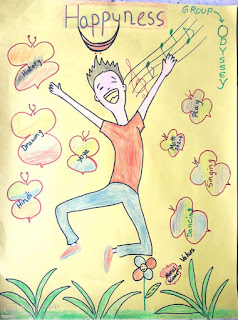 Happiness is that feeling that comes over you when you know life is good and you can’t help but smile. It is the essence of living. Life is not about surviving but enjoying each day with love, hope and aspiration. An individual loses happiness when he feels detached from the finer aspects of life. A self-contented person finds happiness in the simplest of things whereas an unhappy person finds it difficult to experience subtle pleasures in life. If that individual is a young boy, the situation becomes alarming. When a child carries an angry and forlorn look, it is a serious issue. Rajiv joined Sacred Heart School in 2009 as a student of class 4.


From the very beginning, one could sense a young rebel in him. He disliked studying and completing his assignments. It was an arduous task to make him sit still for a minute in the class. Rajiv loved to create disturbances in the classroom and revelled at being reprimanded. His sheer disobedience for school rules made him audacious most of the times. Nothing made him smile. He always wore a grumpy look and argued with teachers nonchalantly. Teachers tried to rein his wild spirits but all in vain. Rajiv lived a careless life who could never be bogged down by detentions and suspensions.
However, there was one thing that soaked up all his negative energy and made him focused. It was the football field that made him happy. He loved to play football. The teachers noticed his love for the game and acknowledged his achievements in the sports field. Gradually the young boy started showing some improvement in his behaviour. The constant praises from the teachers and his peers started working wonders for Rajiv. Over the years, this change transformed him drastically. He was no longer sad or unhappy. There was always a smile on his face and he yearned for the love and affection from the teachers. This led to his improvement in academics. The young Rajiv was now a grown-up student of m class 12. The teachers felt a sense of pride and satisfaction when he successfully completed his board examinations. Rajiv had matured with time and found his happiness in life. 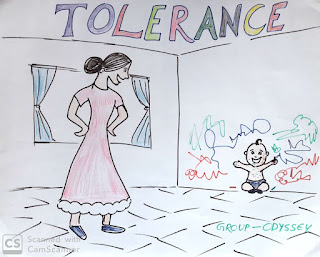 Tolerance is being patient, understanding and willing to accept the ideas of others. There was a boy named Peter studying in grade six. He was a hardworking and innovative student. In the beginning, he behaved well with everyone but slowly he began to change in such a way that he didn’t miss a single day to irritate his teachers. It was very difficult to keep him in the class. He used to create confusion in the class, in the hostel and wherever it was possible. The management was deciding to expel him but the teachers took a brave stand. Peter was not just a student for them. He was a big responsibility and they refused to give up on him.

Some senior teachers thought of talking to him and making him realize about his misbehavior  in the class. Some of the teachers took bold steps to bring some positive changes in him. Teachers like R K Das Sir and Niloy Hait Sir took the initiative. Their sincere efforts paid off in the end. He understood his weaknesses later on and realized his mistakes. Slowly he began to change himself in a positive way. He started thinking positively about the school, about the teachers and about his classmates.