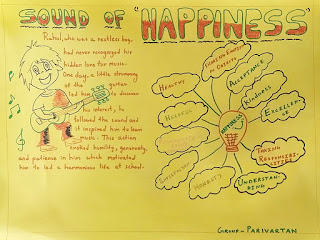 THE SOUND OF HAPPINESS

Rahul was a genius boy studying in the seventh grade, he would have achieved many accolades by then had he not poured out all his energy in being pessimistic. He took unusual satisfaction in disputing classes, vandalizing school properties and self-loathing.

It was on one such evening, as he sat on his bed, planning new tricks for the next day, that he heard something at a distance. Against the stillness of the night, he heard the harmonic rhythm of a guitar and it attracted him towards it.

He left his room and followed the strumming, which led him to Akash (his senior)’s room. He sat quietly beside Akash and forgot all the mischief in his mind due to the melody of the song ‘Stairway to Heaven’ what Akash was playing. Hours passed in the midst of the midnight tune.  This incident led him to kindle a new inspiration in his heart.

The very next day, Akash introduced Rahul to the music teacher of the school and the experienced senses of the music teacher immediately identified Rahul’s natural interest and inherent talent. The teacher gave basic knowledge of playing the guitar to Rahul and he picked up rapidly. After the music class, Rahul borrowed a guitar from the teacher and spent all his spare time practising the guitar.
After a week, people around Rahul could not believe, it was the same Rahul who was the brain behind all the mischiefs in the school as he started playing  guitar instead of planning to disturb everyone around him. This behavioural change was prominent in Rahul since then. He started focusing more on studies and started participating in sports as well.

There was an overall improvement in him, he became a different person and a happy individual, a true genius in all sense. Thus he made his teachers and parents happy too and passed the ICSE exam after three years with a satisfactory percentage 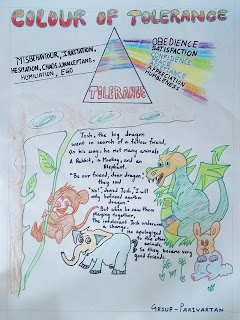 THE COLOUR OF TOLERANCE

Ms Anupama had just joined a new school as a mathematics teacher, it was her first job and it made her very anxious and excited as well. The moment she entered her supposed class, she knew that her students would be a difficult bunch to handle. No matter, how hard she tried to teach and make them interested in mathematics using all her efforts, her students kept on chattering and misbehaving. In the end, she got tired and humiliated, so she left the class abruptly.

On her way out, she met one of her colleagues who asked her about her day and she poured out about her horrible experience in class. Her colleague encouraged her to be more tolerant and innovative in her class.

The very next day, the students were expecting Ms Anupama to be incapable of handling them, but she had a surprise planned for them. Instead of using the same old method of teaching, she took them out on the school field and solved the problems in mathematics by using practical and relatable examples involving the whole class. The students immediately started enjoying the subject like never before and started appreciating Ms Anupama and her classes.