In Pursuit of Honesty 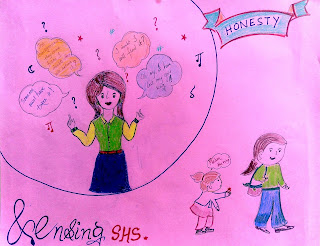 A very dark picture of the society we have painted for the children. A community, where cheating is normal, communities which are blindly materialistic and seek to be economically well off by hook or by crook, an organisation where you would rather lose your moral values than lose your valuables. It is such a society, I talk of today when I relate my account.

A few educated men in my home town had opened a school. They wanted to give quality education to the children of the not so well off people. Else, they thought, those children would have no options but to go to government schools, and have their education neglected. But we sneered at them, as the founders of the school. And even at the children.

Quality education, we thought, was only for the children of the educated middle class. If the family was not in a position to afford a posh fashionable private school, why must we, as educators, bother about the children?

It is no wonder that when I started teaching in this school, I looked down upon the students and often made fun of their English accent, which had a strong flavour of the local language. That was me 15 years back. Ah...I realized how wrong I was back then. I regret having such a snobbish attitude.

Coming back to my story, it happened once that a particular colleague of mine, a very fashionable lady, ost a gold ring in the school premises. She was anxious. And...Why not? The more you have, the more you yearn for materialistic things. The staff was informed to do a thorough search for the lost item.

However, deep inside my heart, I knew that the ring was gone for good. I had noticed the greed in the eyes of the students of the school. Many I know, couldn't even afford a decent breakfast. What if one of them had found the ring? Wouldn't they pocket it? Remember, there were no CCTVs installed in schools in the nineties. Investigations were done based on trust and evidence.

The next morning as we walked to school, my colleagues and me, all we talked about were how we should be careful about our belongings while at school. A great surprise awaited us in the morning assembly. The Principal announced the name of an honest girl, Dibya. Dibya was asked to come forward and tell everyone what she had found under the teacher's table. And it was nothing but the lost ring.

The story remains incomplete if you don't know the background of Dibya. The second daughter of a family of five girls, Dibya was a fragile student who couldn't follow most of the instructions in English. Dibya's father was a drunkard whose death brought not sorrow but a relief to the grieving mother, who was a victim of his physical assaults. Dibya's youngest sister was just a few weeks old and had never seen the father. Her mother was on unpaid maternity leave. The family depended on an uncle for financial aid and support until Dibya's mother would be able to join her work. Wouldn't it be considered more natural if Dibya had been slightly dishonest and not returned the ring? Did she know its value, you may ask. Oh, yes, she did. The poor child, not knowing what to do with it, had sought the advice of her mother. The poor woman would rather starve than have a dishonest daughter.

Dibya works in a reputed firm today. All the girls are settled, I hear. Whenever I meet Dibya's mother, I salute her in silence. 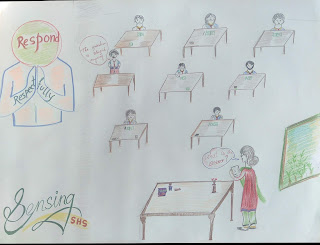 After a brief memory jostling of the previous day's lesson, I started asking questions to the class in general and some students in particular. After several minutes, I directed a question to Aman. I presumed he had not heard it because he did not show any signs of response. I repeated the problem after taking his name loudly. He still did not move. After being elbowed by his partner, he reluctantly stood. "Yes, Aman," I said. "Can we some answer please?" Aman –

"What Answer?"
Me – "to the question, I just asked."
Aman – "What question?"
(Class rings out in peals of smothered giggles)
I repeated the question…….
Aman – "That's a stupid question anyway."
( there is pin-drop silence in class)

Something was squirming within me but I somehow managed to gather my wits and calmly asked Aman to sit down. The rest of the classroom are past mechanically.

The lunch break followed. I purposefully walked to Aman and asked him with a silent smile "Are you OK Child?" His eyes moistened, he lowered his gaze and replied -"Yes Ma'm"

That the moment remains with me as a forerunner for all other such situations that might crop up in the future. A respectful response or no response, to that person who has shown disrespect, at that poignant moment, is the turning point of any story in a person's life. We must respect our own selves so much that we do not get swayed by brazen behaviour. The reprimand should come at a later time.