Today I recall the Art Mela, of my former school, an event that was held two years ago. It was an amazing time. The preparation was in full swing. There was a lot of enthusiasm and zeal to make it a successful event.  Everyone wanted the show to be a grand success and hence contributed with 100% effort.

The Art Teacher had a lot of ideas on her mind, which she discussed with the Principal and the same were being conveyed to the teaching staff as well. As it was not one person's job alone, the ancillary staff,  teachers, students - all became an integral part of the preparation. The external faculties started pouring in and teaching various creative and innovative art-related skills to the students, who in turn, began to create their masterpieces for the Mela.  Decoupage, origami, doodling, coffee painting, woodcraft,  stone painting, clay moulding, you name it and it was all there.

It was my first teaching job. Naturally, I was immensely excited. Besides, I was put in charge of the origami bird hanging stall which had a team of 5 students to manage it. 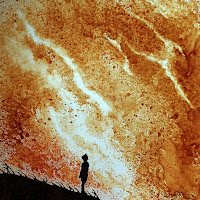 Among these 5, there was a student name Radhika, who appeared to be very enthusiastic and full of life.  She was bold and could approach anyone and pull him/her to the stall. In sharp contrast, I also had the shy, introvert Ria on my watch. She was not comfortable with the assigned task at all.

She was new to the school. She said to me,  "Ma'am it's not my cup of tea,  I cannot do it! " I did not understand how to convince her as she seemed to have given up completely. I looked on Radhika for help. I told her to partner with Ria during the event. Radhika followed my cue and took Ria along as she moved around, talking to the guests (mainly parents and friends of the students), and welcomed them to visit our stall. Given her attractive personality, most visitors crowded around our stall.


By the end of the day, Ria seemed to have learnt something from her peer. Having started diffidently, she began to emulate Radhika. Despite her shyness, she could answer the queries posed to her. I was pleasantly surprised to see her interacting with the visitors, on her own.

It was a win-win situation for all.  I was successful in converting the shy Ria into a courageous individual. Once again the saying -"Where there is a will, there is a way", had turned out to be true.