Courage and Patience Reinforces Tenacity
“I believe that you can; of course, you can,” the teacher muttered reflexively as she looked deep into his eyes that mirrored the very depths of the ocean.

Yes, he is the true epitome of clarity, firmness and perfection. He confronts all challenges with his perseverance. Rohit always maintains his scores in academics. In Grade-IX too, he proved himself by earning the best scorer record. His journey was not at all a bed of roses. He treats ‘Patience’ as the companion of his wisdom and ‘Courage’ as the weapon to endure every situation. 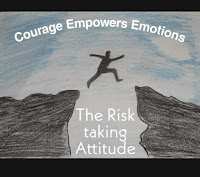 As we know, our classroom is a miniature society, where we deal with many different minds and mindsets. Some are bold, some shy, or courageous while some are timid. His peers leave no stone unturned to comment on him but he always handles those tactfully, by turning deaf ears. Moreover, punctuality is an indispensable trait of Rohit. It is a foundation, not an embellishment for him.

It was time for selecting students to the student council. After a great deal of scrutiny, the names were forwarded. At the same time, there was a great deal of speculation among the students. “Rohit’s name will be forwarded, undoubtedly,” Riya said to her friend, Swapna, who sat beside her.
“Of course, he is the favourite of all,” Swapna responded meaningfully, glancing at Rohit.
The teacher could foresee the reactions of the other children present in the class. As usual, Rohit was indifferent to all those remarks.

Persistently Rohit cleared all the levels of testing as he inched closer to becoming a member of the student council. However, in what seemed to be a bolt from the blue, he did not make it in the final selection.

Predictably, no heartbreaks or overwhelming articulation of emotions came from Rohit. He seemed stoical in dealing with an adverse situation.
“Rohit, how do you feel about this result?” the teacher asked, perplexed at the youngster's calm and composed demeanour despite the defeat.

“Its fine, Ma’am! ... I am okay with everything. It’s all a part of life.” It was indeed a courageous answer from a school-goer like Rohit. He showed true mastery over his emotions as he had realised that despite his talent he lacked the power of charming others through the use of captivating words. This wisdom was beyond his years and can rarely be seen in the children of his generation. For him, success was not final, failure was not fatal; what mattered was the patience to continue. 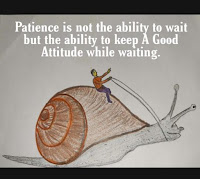 During the Investiture Ceremony, the teacher witnessed the peak of his acceptance when he was assigned the role of an anchor. He worked tirelessly to write the script and he was on his toes to follow instructions. Once again he seized the attention of the audience and the guests. Being one of the most deserving candidates of the student council, he was neither sceptical about his actual role in school nor felt any regret over that event. Importantly, he did not grudge the success of his peers as they were called to the podium and felicitated - an honour that he had certainly coveted. Looking at his set countenance, the teacher saw his patient acceptance, without bitterness, confident in his conviction that its fruit will be sweet for him one day.

Courage and patience are two fundamental attributes to achieve success. Both are complementary to each other. Courage does not mean being physically strong. As we have seen in the case of Rohit, courage means examining the situations or resources patiently and acting to rightfully achieve the goal. Sometimes, it is necessary to overcome our fears by taking risks to achieve success and careful examination of the situation will certainly gather the courage for the same.