“Courage is knowing what not to fear”- Plato

Courage is a simple but profound word. In our childhood, we have written many essays and narrated several stories to prove to the world how courageous we are. However, the reality is that very few of us have mustered this virtue, in reality. We think, re-think and then think again before standing up for a cause even though we know that it is just. Only courage can help us deal with our inner fears and overcome them. Professor Andrew Martin explains, “Courage is defined as perseverance in the face of academic difficulty & fear.” Very often we need a guide or facilitator to help us. Thus, it is important that we teach our students to be bold and stand up for the right cause. Teaching students to have courage in the classroom not only increases engagement and academic achievement, but it also helps them enhance their self-belief and face every adversity fearlessly. 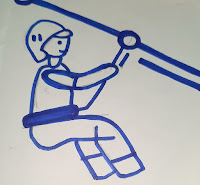 One of us recalls the incident involving a boy, named Ajay, in her class. He was acrophobic (fear of heights) - a fact mentioned by his mother during a Parent-Teacher interaction. A few months later, our school organized a Rock-Sport event in which there were many adventure games. All students including Ajay had enrolled for this event. The game started with many activities including rappelling which required a child to tie himself up to a rope at a certain height and then climb down. While others were excited about this new sport and were animatedly chattering, Ajay was silently standing in a corner. His pale face portrayed his paralysing fear and the dilemma that tore through his little heart.

With the intention of soothing his nerves, the teacher walked up to him, spoke for a few minutes and helped him with the safety harness. Just when he was about to move down, Ajay started sobbing uncontrollably and refused to descend. He untied himself, shakily drank some water and sat down. After some time, the teacher went up to him again, spoke to him at great length and helped him overcome his fear. Ajay agreed to try again and this time he managed to complete his activity. Later on, he even admitted that after the initial few moments of abject terror he actually enjoyed himself.

It is, however, not possible to be courageous in a day– one needs to steadily build up this trait. Patience plays a key role in this process.
One of our teammates visits a class once a week as a reading teacher and after about a month she took notice of a timid child named Arghya. His passivity was of a different kind. It was not merely about being introvert– there was something more to it. He refused to speak even when spoken to.

Her initial efforts of striking a conversation failed. She did not give up and continued with her efforts. Slowly she started receiving monosyllabic answers from him, though there was still a sense of unease in the child. The teacher then tried talking to his friends and came to know that in Grade 5 he was once rebuked by a teacher for a mistake. The incident was reported to his parents as well and this caused him to recoil into a shell. He intentionally avoided speaking too much with teachers. Upon further inquiry, she found out that his behaviour was very different when he was with his friends. She decided to do something about it and came to meet him every day before dispersal. She shared her day’s experiences with him and urged him to do the same. There was a lot of resistance from his side but gradually he started to open up and after a few months, they shared a unique camaraderie. Arghya is now an enthusiastic member of the class.

Courage and patience is valued intricately connected to manage negative emotions and they draw on many of the same characteristic adaptations related to emotion regulation. It is important that we let both these virtues enlighten our paths in this journey of life.