- Respecting someone indicates the quality of your personality.

There was once a boy who always treated his mother horribly, shouting at her, insulting her. It didn't matter to him how sad he made her.

One day, without knowing how, he woke up in an immense desolate and lonely place. He was sitting on a rock from which four huge pillars rose up into the sky, appearing to support the entire world.

He was all alone, but soon an enormous flock of crows with beaks made of steel landed on the rock and set about violently chipping away at it.

After the crows had left, a mysterious door in one of the pillars opened, and a charmingly pretty girl came out.

"Have you come to help us? That's great! We need all the people we can get." The boy was puzzled, and spotting his confusion, the little girl explained. "So you don't know where you are? This is the centre of the Earth. These pillars support the whole planet, and this rock keeps the pillars in place."
"And how can I help you?" said the boy, still confused.
"Well, to help, look after the rock. Anyone can see from your face that you're the best person for the job," answered the girl,"The birds you saw are only increasing in number, and if we don't look after this rock it will eventually crumble and everything will come crashing down.”
"And what do you see in my face?!" exclaimed the boy, surprised.
"I've never looked after a rock in my whole life!"
"But you'll learn how, even if you've never done it. Here, look in this mirror," said the girl, holding one in front of the boy's face.

The boy was astounded to see that he now had the face of a bird, with his nose gradually turning into steel. There he stood, shocked and worried, not a word passing his lips. "All those crows used to be children like you and me," explained the girl," but they decided not to look after the rock. Now that they're older they've turned into evil birds; all they do is destroy. So far, you haven't done much to look after it, but now that you know, will you help me to preserve all this?" Her face was radiant with a smile, as she took his hand in hers.

The boy still didn't quite understand anything. He looked closely at the pillars and could see that each one was made of thousands and thousands of little figurines, representing the best virtues: sincerity, effort, honesty, generosity...

Closely inspecting the ground beneath him, he could see that the enormous rock was made up of little instances of children showing respect to their parents, grandparents, brothers, sisters, and the elderly.

On the other hand, the crows were trying to erase these instances of compassion by carving out scenes of disharmony - shouting and insults. Next to his feet, he could see his own little carving, representing the last time he had shouted at his mother. The image of his misdemeanour, in such a strange place, made him realise that the only thing keeping the columns standing was respect. Respect was sustaining the world. 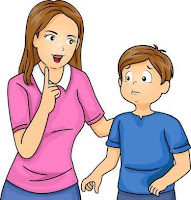 The boy, filled with regret, stayed there and looked after the rock for many days. He carried out his task joyfully, going without sleep to repel every crow attack. He carried on until exhausted by his efforts, he collapsed; completely spent.

When he woke up he was back on his bed at home, and could not fathom whether it had all been a dream. However, of one thing he was certain that no crow would ever again get the chance to carve a picture of him shouting at his mother.