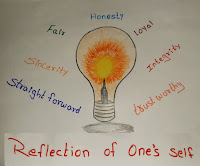 It left an indelible impression on my mind. It happened last year.  I could see him anxiously looking at me in class. So, I called him out of the class when the period was over. He was eagerly awaiting this opportunity to open up. He insisted that I accept his opinion.
“Really, Ma’am,” he said.
At this, I gave him a stern look. “How can you be so sure about it? Do you have any proof?”
“Yes, Ma’am! I know only he had done it.” Ravi spoke with more conviction.
“Don’t blame others without any evidence, Ravi.” I retorted.
He pleaded again, “Ma’am, will you check the footage?”

Eventually, it was allowed on one condition that Ravi would not disclose the matter to anyone.
Ravi took a deep breath of relief after he had got to know my affirmation in this matter. He was scolded by his mother two days back for his careless behaviour as he had lost two hundred rupees. Sometimes, he brought enough money to treat his friend in the school canteen.  On further investigation, I was forced to concede to Ravi’s supposition. It was difficult to believe that Karan had done it.  A day was appointed to call Karan and his parents. I made a conscious effort to speak to the child with a lot of love and patience. Indeed, love and care are the most significant weapons to bring a child on the right track. I realized the pliability of the situation. I knew that every word of mine could have a lasting impact on the child's mind. It might cause abject unhappiness or a positive effect. It was like ‘saving someone from drowning’.

In the presence of Karan’s mother, I took this child into confidence. During my conversation, I focused a lot on the constructive changes in Karan from Grade –VII to Grade-IX. All of a sudden, the boy couldn’t control his emotions and broke down. They are very well off, yet his transgression had been out of a temptation for outside food. The teacher witnessed ‘honesty’ in his confession. At once, he promised that he would not let anyone down in his life. He left the room with a broad smile on his face after receiving the assurance from his teacher that his self-respect would remain intact. It was just a first step of learning moral values for him through experiences.

Days went by, Karan exhibited noteworthy changes in his behaviour as well as in his academic prowess. He kept his promise; he never gave the teachers reason to scold him. Even Ravi showed maturity and acceptance as he did not look down upon Karan.  I continued with my teaching, with no reference to the incidents that had shaken up the youngsters. Neither was Karan reminded of this unpleasant episode, nor was he looked on with suspicion by anyone. The dark spot was wiped out entirely from Karan’s life when his name was suggested for the best student of the month.

I found ‘a new respect’ for Karan and Ravi as I fell in love with both of them.
We, the educators can simplify the term ‘honesty’ to mean care, trust, truthfulness, acceptance, tolerance etc. through our actions and by setting an example to make it understandable and achievable for the youngsters. When a learner receives appreciation, he/she immediately starts appreciating these values and gets one step closer to becoming an honest person. Honesty serves as a mirror which reflects the amount of respect for another person in one's mind.