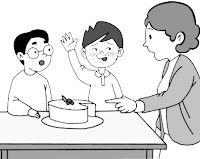 Honesty and Respect play an important role in everyone's life and it is a character which is visible with open eyes like an open book. Having considered as an honest person by society is one of the best compliments one can dream of in his/her life. A person who is honest will always be respected by all. An honest person enjoys a light-headed feeling because he doesn't feel the stress and tension of lying.

Ultimately, Honesty enhances the reputation of a person. He/She enjoys enormous respect in society, school, college, etc. Furthermore, a truthful person can easily generate trust with other people. If a person is honestly dedicated towards his work or profession, his work will be admired by all and he will earn respect. "Honesty makes us glow and Respect makes us bow down"

Often children try to get away from trouble by telling lies, therefore, the duty of parents and teachers is to make them understand that Honesty is the best policy. Students should be taught that harsh truth, no matter how hurtful, is far better than the white lies that profoundly impact the character and create a bad perception in society. Instead of rebuking a child for dishonesty, what an educator can do is to regularly interact with them about the values of honesty in the social sphere. Honesty is the bedrock on which relationship stands and mutual trust, as well as respect, can be built.

Respect is earned by our actions and it is important to remember that respect is a two-way street. If you respect a person, then the person also respects you.  The three vital things to have respect for is, respect oneself, respect for others and respect for belongings. Students should be taught to respect, which will enable them to exist well in human life. Without


respect and honesty, it's very difficult to make friends or to build a successful career.

Nikita Rajpurohit
The Fabindia School
Posted by Bharti Rao - May 10, 2020