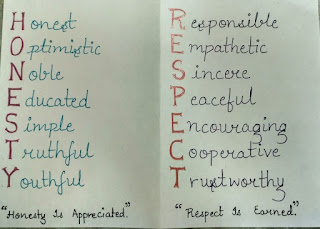 Honesty means telling the truth and fighting for the right cause. A person who is honest will stand for truth in any situation. Respect means having due regard for everyone i.e. elders, youngsters, environment, teachers, etc.

Here comes the situation of my class. Ram and Shyam were best friends. One day, Yash, their classmate, brought an expensive pen to the class. He was showing his pen to everyone. Shyam liked the pen a lot. When the whole class went to play games, Shyam went to the class and stole the pen from Yash's bag. Ram was following Shyam and saw everything, but he quietly went back to the ground to play.

After the game lesson, everyone went back to the class. Yash could not find his pen, so he complained to me as I was having my lesson.  I asked everyone if they could find Yash's pen. All the students said no. I told them that, if anyone had taken it by mistake, then return it. If you can't give the pen in front of the class then quietly keep on my table. While going back home, Ram told Shyam that he had seen what happened during the game's lesson. Shyam told him that he liked the pen but couldn't buy it. So he took Yash's pen. Ram told him that stealing is not correct and if someone finds out then no one will respect him.

Next day Shyam quietly gave the pen to me and felt really bad for what he did. He even asked me not to reveal his name to his classmates, otherwise, he will be humiliated in front of the class. In the class, I gave the pen to Yash and told everyone that I was happy that Yash got his pen and my students knew the importance of honesty. I even told them that we should respect what we have and should never do bad deeds for our satisfaction.  I was also happy that Shyam realised his mistake and honestly accepted his mistake. I even felt happy that Ram motivated Shyam to accept his mistake.

Prerna Rathod
The Fabindia School
Posted by Bharti Rao - May 10, 2020