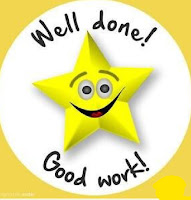 Keep up
The Good Work…

Akash very happily packed his bag and left for school. On his way, his mother asked him the reason for the wide grin on his face. He told readily that he shall get a smiley today because he helped his friend with some difficulties while completing his homework.
His mother quizzically questioned what that meant.
Akash said that his class teacher Ms Jeena would award them with a small paper smiley whenever they do something worth appreciation. She told them that towards the end of the year, the child with the maximum number of smiley’s will win.

I'd get a hand-made certificate from her. 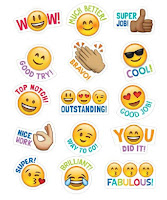 With that thrill in his mind, he reached school and waited for his teacher. As soon as she entered all the children wished her in their sing-a- song way "Gooooood morninggggg teaaaacher!!!"

After she noted down the attendance she fished out a pouch from her purse and children looked at it as if she had some magical wand in her hand. Then she called out three names and asked those students to stand in front of the class.

One of them was Akash. All others applauded for them as if they were some celebrities. Ms Jeena announced that Ms Divya gets a smiley because she volunteered to mop the class, the day before, during lunch break, setting an example of 'Humility'. Master Akash gets it because he spent some time after school helping his friend with homework and Ms Riya gets it because she completed her work before time and that it was absolutely neat and presentable. By the end of the year, every student managed to collect some number of smileys. 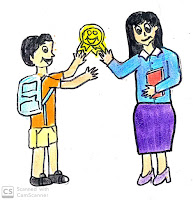 It was the day of grade 10 results and all students gathered at school to collect their mark-sheets. Akash tried to locate Ms Jeena. When he found her, he very proudly said that "Look, ma'am, I have 25 smiley’s that you gave me in grades 8,9 &10. I have kept them as a token of appreciation from you for every small act of goodness of mine. I shall follow your method in my life". On that note, Ms Jeena fished out one more smiley from her pouch and handed it over to Akash as appreciation for his performance in his grade 10 examinations!

Akash now with his mark-sheet and 26 smiley’s returned home happily!!

‘The roots of goodness lie in the soil of appreciation’.
‘Humility is never deceitful’