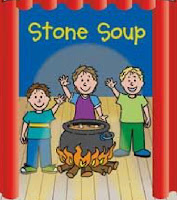 Stone soup for the Teenage Soul.
The real deal Friends.

Once upon a time, there was a distant village which was experiencing extreme famine. Villagers did not have much to eat and each villager even guarded what little food they had. 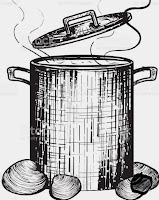 One morning Nishant thought of an idea. He stood in the village square and pulled out his bag, all the villagers closed their doors thinking that he may ask for food but Nishant announced loudly “Oh! It is breakfast time, I must make some delicious stone soup”.

People felt he was just mocking, and they paid no heed to him but two of his friends Vansh and Sameer came up to him. Nishant said something in their ears and soon they began to call out - “Let’s make the stone soup!”

Vansh brought a large cooking pot, Sameer brought some wood and they lit a fire. Children started clapping with happiness.  Hearing the cheerful sound of their kids, the villagers came out. 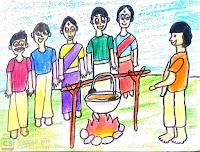 Nishant sniffed the broth that was only water and said “Oh! this smells delicious! If only onions were added to it!” The villagers began to overcome their mistrust. Few villagers ran and brought onions from their house. Nishant tasted the broth again, and licked his lips saying, “If only it had some tomatoes!”. Soon a villager ran to his house and brought whatever he could find and so it went on.

Soon the big pot was bubbling over and steaming. When the soup was ready, everyone in the village drank the soup to their hearts' content.

The villagers, curiously,  asked Vansh and Sameer what Nishant had whispered in their ears. They said, our masterji has taught us in school “Coming together is the beginning of Cooperation as it always seems impossible until it’s done with a Responsibility”.