“Never be afraid to trust an unknown future to a known God.”― Corrie ten Boom

Once upon a time, in a faraway land, lived a man who had complete faith in God. One night as he slept soundly,  a loud noise woke him up. When he opened his eyes, he saw that his room was filled with light. Just then God appeared before him, showed him a large rock outside his house and told him to push it with all his might.

Next morning when the man woke up, he remembered his dream. He went outside and was surprised to find the rock outside his door. Obedient as he was, he pushed it with all his might; but was not able to move it. However, the man did not give up; instead every day he would push the rock with all his might.

For many years he toiled from sun up to sundown, his shoulders set squarely against the cold, massive surface of that large rock, pushing with all his might. Each night the man returned to his cabin, sore and worn out, feeling that his whole day had been spent in vain as the rock did not seem to have moved the tiniest bit after so many years. Not seeing any progress, the man started to feel discouraged. Just then devil showed up in his dream and said, “ You have been pushing that rock for a long time but it hasn’t moved! Why do you go through all that pain? It’s impossible to move that gigantic rock. It is better to leave it at this and live an easy life", saying this the devil disappeared. 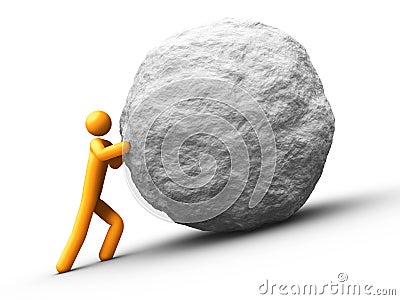 The man was disheartened but did not turn away from his beliefs. He decided to pray to God and tell Him about his troubled thoughts. He prayed, “I have laboured long and hard in your service, putting in all of my strength in what you have asked me to do. Yet, after all this time, I have not even made the rock budge by millimetre. What am I doing wrong?? Why am I failing?”

Just then God appeared and said, “My child, I asked you to serve me and you accepted it unquestioningly. I told you to push the rock but I never said that I expected you to move it! Your task was to push and after all these years, you think you have failed. But is it really so? Look at yourself, your arms are strong and muscled, your back sinewy and brown, your hands are callused from constant pressure, your legs have become massive and hard. Facing opposition you have grown and your abilities now surpass those you had before. You haven’t moved the rock, but your calling was to be obedient and to push, to Exercise your Faith and Trust in My Wisdom. This you have done.”

Moral: At times when we face difficulties in life, we should just trust in God and Push. By all means, exercise the faith that moves mountains but know that it is still God who moves mountains.