Simplicity and trust is pixie dust……
Happiness is when what you think, What you say & What you do are in HARMONY………   Mahatma Gandhi

Mr Andrews loved his students and always found ways to make them understand the morals and values of life. It was on a Thursday that he decided to display yet another instance of value-teaching to his class. He brought three toy monkeys, identical in shape and size. Placing them on the table, he asked his students to look for any difference in the monkeys. After observing closely for quite some time, the children realized that there were holes in all the three toy monkeys!!
The 1st monkey had holes in both its ears.
The 2nd monkey had holes in one ear and the mouth.
And the 3rd monkey had only one hole in its ear. 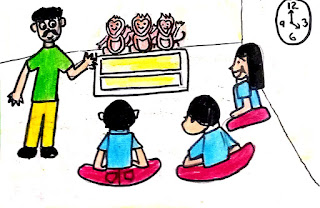 Finally, the water entered the 3rd monkey's ear and stayed in.

The children quietly observed this and then looked at Mr Andrews puzzled. They were eager to know what it meant.

Mr Andrews acknowledged the curiosity of his students and sat them in a circle. He took each monkey in hand and went on to explain.

The first toy monkey represented people who will show eagerness to spoken words but will never value them.

The second toy monkey represented the people, who will listen to every bit that is said, but as soon as one turns away, they will speak ill about that person. They will break your trust.

And the 3rd toy monkey represented the people who have a simple approach, will listen to you and will value your words forever. These are the people whom you can always count on. 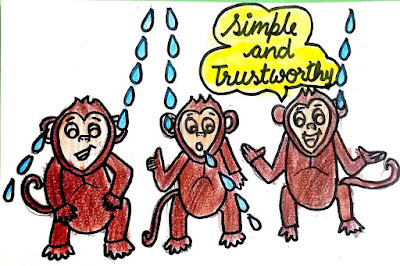 Simplicity is an inbuilt value, a nature itself of a human who will always be approachable and will never break trust.