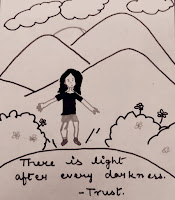 Simplicity means adopting a no-nonsense lifestyle. This is possible only if we can do everything without restraint and ease by trusting in ourselves and making it successful.

The simple meaning of simplicity is a life in which there is no curtain of any kind whether it is on thoughts, language or living. The biggest success of a man is that he should first understand himself and then someone else. This means that we must adopt enlightenment and simplicity to know ourselves. For enlightenment, we have to experiment on ourselves, which requires trust and confidence.

We know that all the elements of nature do their work easily; there is no special complexity in them. At the same time, the rise of the sun, the changing of the movements of the moon, the excuse of the winds, the sound of water, the tweet of birds, the growth of trees, and the change of seasons, are many such incidents in which transparency is evident and this is our belief on which Earth is intact.

Nature and man is interdependent but as long as there is simplicity. If there is a complication in an activity such as the indiscriminate burning of natural resources by humans and losing the synergy of nature, is disastrous for both, but faith is the only door on which the earth and humanity are alive.
Gradually humans evolved and civilization grew further as well as morality. Today, to save humanity, they are adopting simplicity whether it is food or living.

Presence and confidence in the present situation of the lockout of Covid-19 is also a unique example of faith. There were many great men who always adopted simplicity such as Mother Teresa, Mahatma Gandhi, Vivekananda etc. Vivekananda made India the world leader from the world stage of Chicago with his simplicity. The conduct of these great men is simple - "Plain life, high thought", which should be adopted. Only then will there be the welfare of the younger generation.

A teacher is responsible for the personality development of students in a classroom. It is often seen at the primary level that students do what has been said by the teacher and therefore are able to build the future of the student by looking at that trust. This is the stage where we can strengthen the foundation of the future. Also, the problem should be resolved by listening to the students' talk as far as possible.