“If you truly love Nature,
you will find beauty everywhere”

When you really see an aspect of yourself clearly with no judgement you are at the door to Peace and Freedom.

It was a bright Monday morning. Mr Wilson entered the class with a bright smile. It was our Art class. We were ready for the topic. Mr Wilson with a twinkle in his eyes instructed to put down our thoughts in the form of a painting that depicted Peace. And the best painting will be awarded. We were excited and got started. Each table had a set of crayons, pencil shadings, expensive painting colours.

Peter, one of our classmate, was unclear on this topic. He questioned what exactly is Peace. Mr Wilson placed his hand on Peter’s head and told him that he has full Freedom to express anything that defines Peace for him. He looked straight in Mr Wilson's eyes and nodded. Soon everyone began with their presentation. John, one of the most creative boy and always bloom with ideas had reached halfway with his picture. In no time he was done and the result startled everyone. Mr Wilson stopped at John's table and was very pleased. It was a calm and serene lake which mirrored high snow-capped mountains. A blue sky above with white, fluffy clouds. The chirpy colourful birds flying free. The rays of sun slowly climbing up behind the mountains still feeling cosy inside the clouds. Everything was perfect and so peaceful!
Each one in the class appreciated John's painting.

It was about time for the best painting. Everyone was already congratulating John as they knew it would be him. But when Mr Wilson announced the best painting everybody's jaw dropped.
It was from Peter !!
But how?? Why ??
Peter's picture too had mountain but was bare and stony one with no greenery. The sky was painted with a blend of orange and red that looked rather angry. There was lightning and thunder. Clouds were rather dark and the picture was overall a dull and a gloomy one. What made Mr Wilson select this one?
Mr Wilson requested his children to look at the painting closely...

In the huge mountains, there were small cracks which had a bush. In that bush was a tiny mother bird that had built its nest. Amidst all the thundering, she was secure and at peace in her nest. It was its state of mind that did not get disturbed by its surroundings. 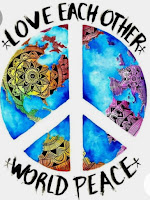 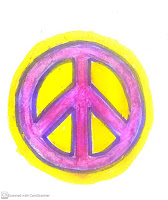 Peace does not mean to be in a place where there is no noise or disturbing situations. Peace means to be in the midst of all those and still be calm at heart.


A Freedom to accept a state of mind with is Peace.