Thoughtfulness is the beginning of great sanctity. If you learn this art of being thoughtful, you will become more and more Christ-like, for his heart was meek and he always thought of others. Our vocation, to be beautiful, must be full of thought for others..... Mother Teresa 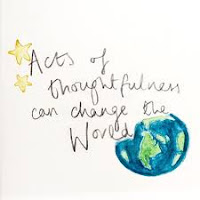 In a class of 25, there was a very quiet and timid boy, 12 years of age. His name was, Arnav. He was really shy and did not like to interact with anybody. The other boys of his class were always jumping about and playing, and having the time of their lives, whereas he used to sit in a corner quietly, and sometimes read a book or just did nothing. He never spoke to anyone neither did he try to interact. His classmates had tried at the beginning to make him their friend but could not succeed. Since he was a new student in the school, he himself did not know anyone, nor did he know whom to rely on. He had tried his level best but could not blend in with his surroundings. This behaviour of the child was eventually noticed after some time, by his class teacher, Miss Rogers.he used to intensely observe the child, day after day to see if any change had come about him.

She vowed to herself, that she would take the initiative, and make Arnav, the proper boy for his age. It was Arnav’s birthday. Nobody knew that of course, and Arnav hadn’t expected anyone to know. But, Miss Rogers, the class teacher understood what was going on in his mind. She knew this because she had planned a surprise party for Arnav along with his classmates on that day. She was just waiting for the right time.

Arnav had just come from the washroom during recess when he saw that his classroom was entirely empty. Neither his class teacher nor his classmates were there. He was feeling lost, but quietly went and sat in his place. Just as he was about to begin eating his lunch, the light went off and then, from behind the benches, his classmates popped out and among them was Miss Rogers. They all had planned to have a cake cutting and so they did. They also sang songs for him. For that period of time, Arnav had forgotten, to be shy. He was just another normal, carefree schoolboy, having the best birthday ever.

After the party, Miss Rogers called him aside and explained to him, that being shy, never helped anyone. He had to open up if he wanted to enjoy all the fun that life had in store for him. Arnav completely understood what his teacher meant, and became friendly to all. He made a large number of friends and started to enjoy his school life. His teacher had achieved this miracle by showing thoughtfulness and understanding the mentality of Arnav.
- Innovators @ Billabong High International School, Thane
Vaishali Phatak, Krishnakshi RaviShankor, Bhumi Punjabi, Smita Bobhate