Lessons are not always taught by teachers; they are sometimes taught by students too.
It was the year 2009. Old grades had moved to the new. Grade VIII F was eagerly waiting for their new yet not so new teacher on the first day of the new session.

‘I have heard so. She was then a primary school teacher. Teaches English well, though, that’s what I could gather from Ms Sangita when I tried to run a BGC on her’, replied Kavya
.
‘Can we extend a unique welcome to this new teacher?’ suggested Riyaz.

‘No, not again, Riyaz. Keep your fanciful ideas to yourself or else we will have to make multiple visits to the Princy’s office for those dreaded permissions, stern looks, and a sneer. You know we are not a popular class’, whined Megha.

Undeterred, Riyaz went on proposing the same to each student of the class till the assembly bell rang, and it was the moment of truth. The class lined up in the corridor to move to the quadrangle, as was the practice. They waited with bated breath and fast-beating hearts for the first glimpse of their new teacher. And, when the teacher arrived, Riyaz started clapping. The class had no choice but to clap with him. Other grades lined up in the corridor turned to see the one more ‘Great Indian Tamasha’ of this unpopular class. 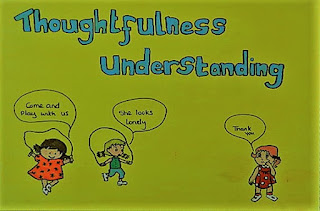 Such was Riyaz’s thoughtfulness. A value of a very high order had already germinated and bloomed in this young teenager. He belonged to an affluent business family, was an ordinary-looking boy who no one would notice in the crowd of popular, intelligent, and smart students. Yet, no one could deny his existence as the most philanthropic student at the school.

Riyaz would not let go of any opportunity to help the class or teachers. He offered his services to carry notebooks to the staffroom, would not mind carrying the correction bag for a teacher who may never have taught him. He could also double up as the fastest fund generator of the class whether it was a surprise party or a calamity.

He hardly completed his homework, even if the teachers were fortunate to be handed over his books for correction sometimes, the teachers would end up writing more than Riyaz in his notebooks. Passing tests was never his cup of tea. Somehow, he scraped through rein his final exams and managed to move up.

The sweetest thing about this boy was that he never stopped smiling. And he never stopped indulging in his passion for service. This made the class respond to Riyaz’s whimsical ideas with unity. He was well understood by his peers and teachers. He was a man of his words from his early childhood days. Dependable, proactive and a go-getter. He tried to understand everybody’s needs and never hesitated to offer solutions to the problems knowing fully well that the wiser ones of the class may reject his ideas.

He was the habit of the class. They hated him yet loved him for his quirkiness. He was clumsy yet adored by his classmates. He was academically weak but probably the strongest in socio-emotional developmental traits. He knew how to keep fights at bay and take everyone along in the journey of life. He understood others but never expected to be understood.

He is an entrepreneur today. His business is thriving. He is the first one still among his grown-up classmates who never forgets to wish his teachers on their birthday or send them invitations for family events. Charity and social work are now his way of life. He has proved that marks do not matter to be a highly successful human being. What matters is thoughtfulness and understanding.