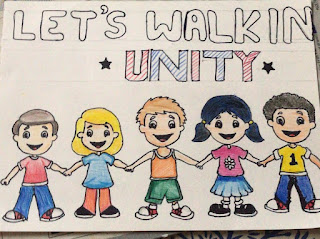 "We are different; we are always have been and always will be. However, different shouldn't divide us, but unify us because different is an asset."

"The simple act of caring is heroic"

In the month of November usually, school arrange a trip for the students. One day the class teacher announced that they are having their trip to Adlabs Imagica on 20th of November, and fees for it is 2000 and they need to submit their amount before the 15th of November. The teacher could see the excitement in the eyes of everyone. Students started discussing the rides and fun they would be doing during the trip.

Next day few students submitted the amount. Sam to seem to be disappointed the whole day. Being a smart child in the class he was not interacting in the class, not giving correct answers in the class. The teacher tried to find the reason for his disappointment, but he did not say anything and left for the day.

Next day the teacher told his friend Chetan to find out the reason for his disappointment. It was the last day to submit the amount for the trip. The teacher called out the names of the students who have not submitted the amount. When ma'am called out Sam's name, he got up from his place with the smile on his face and also the excitement which the teacher saw on the day when the trip was announced.

Next day the teacher asked Chetan what was the reason for his disappointment? Chetan replied there was a problem but it has been solved now.

The teacher asked what was the problem? Chetan explained the whole story that there was a major financial problem in Sam's family. So he was disappointed that he won't be able to join the trip. After this all the students in the class decided to help him out, they talked with their parents and they contributed to him.

This is how the students united themselves and came forward to help Sam, and showed the value of unity and caring.