Unity and Caring –Unity is the strength
Caring for someone is easy, but to make someone care for you is difficult, so never lose the one who really cares for you. 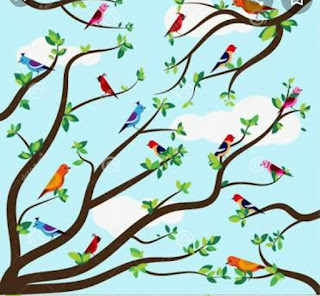 Pavo, the baby cuckoo, chirped noisily as he tried to take flights in the air. His father sat with his grandfather, having a hot conversation. Pavo’s father said, ‘Day by day, the tree is becoming empty with the birds either leaving it to find shelter somewhere else or getting killed by the monstrous beings’.

Pavo’s mother said in despair, ‘Every day, one of us is killed. I am worried about what will become of us.’ The father said, ‘If we don’t do something, there will come a day when none of us will remain. These monsters have guns to easily shoot us and we all will die instantly.’ Pavo’s grandfather replied, ‘You’re right son. We’ll try to talk to the others tomorrow with the hope that they will listen to us for once.’

It was a big apple tree on which a great diversity of birds lived, but they had no unity among themselves. They were hence divided into two groups. One consisted of Pavo’s family and two families of crows, and the other families belonged to the second group who immediately rejected the ideas of the grandfather. 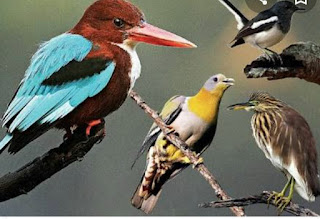 The next day, at the meeting, the grandfather said, ‘We will attack at the hunters together, each with a stone in their beak so that they won’t get a chance to fire at us.’ The idea was rejected by Mrs Aggy, the eagle, who said, ‘No, thank you. This is not a contest of courage.’

Pavo’s grandfather smiled. ‘But what you are implying by refusing to join us, isn’t it cowardice? When the tree- your home needs you, you are turning your back.’ Mrs Aggy then stood up, turned and flew away.

The next morning, when the hunters came, the feeble efforts of Pavo’s small group proved to be futile in the beginning. But when the birds in the neighbouring trees saw more of their fellows falling dead, they realised they couldn’t take it any longer. It was then when Mrs Aggy, Mr Woody and all the other families joined the attack. The sky became crowded with the countless birds dropping pebbles on their human enemies. Where divided they had been falling, united they had risen with mighty strength and finally achieved victory. 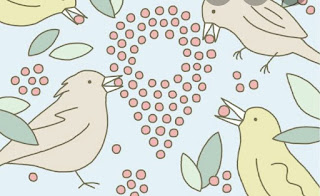 If we just stop and think for a moment, we will realise that our country is facing the same situation as people are divided into various factions. We must stand united as one nation and must step up just like the birds who saved their homes. We have to get together just like the little creatures did.

The Almighty has given us hands that are our greatest boon. For the needs us to lend a helping hand; a hand for holding, extending a hand for friendship, handsome is what handsome does, a hand-full of love, care, so on and so forth. Let's look at our hands to spread joy, care, love and unity in the days to come.