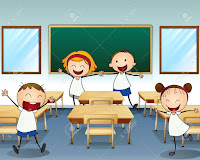 “Saavi, look out!” cried Ria. The horrid boys in my class were in the middle of one of their usual fights. In order to hurt each other very badly, one of them had hurled a metallic bottle at the other. Unfortunately, I was in the way. Despite Ria’s warning, I could not ‘look’ out. You see, I can’t see very well. I have a genetic disorder that clouds my vision. I am one of those ‘special’ children you see in classrooms of inclusive schools. Everyone tells me that I am fine. But I am not, really. The teachers print large question papers for me, I have difficulty reading the textbook or any other book for that matter.

At school, Ria has been my eyes. I cannot fathom the depth of her affection for me. We are neither related nor are our parents, friends. Ria has, since grade 3, volunteered to help me in every grade that we have moved together. Even after 4 years, we are as thick as thieves.

There are two other ‘special’ children in my class. These two boys, Avi and Krishna, are so hyperactive that they can stir up a hornet’s nest in virtually seconds! They have always been naughty but luckily were in separate sections. Suddenly I found the two in my section this year, much to my annoyance. But then, who am I to judge anyone?

The Avi-Krishna combination proved to be a disaster for my class. They fought between themselves and instigated the other naughty ones (I gather, there were around 3 or 4 more) to join in the fracas. The class erupted in a frenzy of fistfights with dusters, shoes, and water bottles being used as missiles. None of the teachers liked coming to our class. Our charts on the soft boards were torn, fan blades bent, door handle broke, and so on and so forth. Whenever these boys fought, innocents were caught in their fights and got hurt.

Strangely, they had been exceptionally careful about me. I always had the first place, in front of the teacher, and so very often in the way of the crazy fights. Ria was instrumental in keeping me safe. But I always sensed a tenderness or whatever these boys could be mellowed down to – in their attitude to me. It was certainly not pity, as nature developed a very sharp nose in me for it. Were they even capable of care?

I think I had the answer then. In the middle of the fight, somebody had hurled a 1-litre metal bottle that was filled with water. It headed straight for me. I stood stupefied in spite of Ria’s cry, “Saavi, look out!” Within seconds Avi shielded me (how did he manage to fly in my direction so soon?), while Krishna leapt and caught the bottle. It hurt his index finger. If he winced, I could not see it.

Somehow, something changed in my class that day. Of course, the fights remained but were less intense. They fought but their aggression had mellowed. Perhaps they had seen what damage their behaviour could inflict? They argued, exchanged a few slaps, but realized that together they can change.