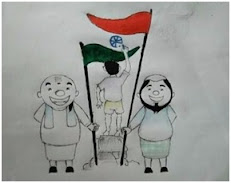 Kranti. It is considered as an important movement in the freedom struggle where masses also participate and take charge itself.


In April 1942, the Cripes mission failed. Within less than four months, the third great mass struggle of the Indian people for freedom started. This struggle is known as the Quit India movement. On 8 August 1942 at the Bombay session of All India Congress Committee by Mahatma Gandhi during World War II passed a resolution of Quit India Movement. This resolution declared that the immediate ending of the British rule in India was an urgent necessity for the sake of India and for the success of the cause of freedom and democracy, for which the countries of the United Nations were fighting against fascist Germany, Italy and Japan. The resolution called for the withdrawal of the British power from India. Once free, it said, India with all her resources would join the war on the side of those countries who were struggling against fascist and imperialist aggression.

The mantra of movement do or die. We shall either be free or die in the attempt”. “Quit India” and “Do or Die” became the battle cries of the Indian people during the Quit India movement. By the end of 1942, about 60,000 people had been jailed and hundreds were killed. Among the killed were many young children and old women

The war years were a period of terrible suffering for the people of India. Besides the misery caused by the repression by the British army and police, there was a terrible famine in Bengal in which about 30 lakh people died. The government showed little interest in providing relief to the starving people. There is no doubt that the "Quit India Movement", united the Indian people against British rule. Although most of the demonstrations were suppressed by 1944. But after Gandhi's release in 1944 from the prison, he continued his protest and went on a 21-day fast. By the end of World War II, Britain's position in the world had changed dramatically and the demand for independence could no longer be ignored.