Robert Collier said, “Success is the sum of small efforts, repeated day in and day out.”
If success brings happiness, the persistency that leads to this happiness comes only with tolerance. Without being tolerant, happiness is a misunderstood act and if one is not happy about being tolerant then it is anything but tolerance.

For class 7th girls happiness was about making fun of the poor accent of Rohini, they would not include her in their games or their study groups. Until their class teacher, Kirti decided to teach them the lesson they will remember for a lifetime. Kirti started taking extra classes with Rohini and started preparing her for the assembly conduction in English. With this motivation from the teacher, Rohini also got her confidence back and started putting more efforts.

She learnt quickly and the day she conducted assembly the whole school was surprised, the Headmistress too praised Rohini and everyone applauded for her performance and attitude. That day, when she entered the class she was not only welcomed but also respected. Children often confuse happiness with having fun even if it is at the cost of someone’s emotion so it is important to make them understand that happiness without tolerance is not only incomplete but also fake and short-lived. 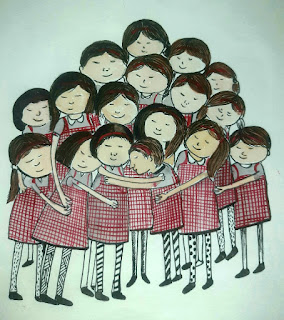 Mamta has been teaching primary and pre-primary classes in a boarding school, her role in the school and her student’s life has been beyond teaching which was inspiring yet challenging. In her third year of teaching she had a new admission in her class 1, a sweet little girl from a small town near Kolkata, who could not speak or understand anything except Bangla. The girl had left her parents for the first time; she was emotionally disturbed as why she had been sent far from her parents and withdrawn herself from everyone. Mamta was her teacher but before getting into teaching, she had to break that emotional barrier and with language gap, it seemed to be an impossible task. She learnt a bit of Bangla, got a few sentences translated into the language so she could communicate with the child. With her affection, persistent efforts and tolerance for the child, she broke that barrier. Today that girl is an all-rounder; she is not only good in studies but has won lots of prizes in Music and Art as well. Because of Mamta and other teachers of the school, she understood why she was sent here and now her younger brother is also a part of the school, who again speaks only BanglaJ.

While talking about Tolerance and Happiness, it is worth mentioning the remark of a co-teacher who said, “If Happiness is the centre of a circle then Tolerance is the circumference”. And, I feel that at school we are tied with a stretchable string. We keep bouncing back to the centre and take the further leap to make the circle bigger every time.
Proud to be Educators From Medley DGS - Anubhuti Sharma, Chandralekha Negi, Kirti Bisht, Mamta Kandpal, Neelam Waldia and Sugandha Ahluwalia