“Be a reflection of what you’d like to see in others. If you want love, give love, if you want honesty, give honesty, if you want respect, give respect. You get in return, what you give.” Anonymous

Nearly everyone knows the story of the poor wood-cutter whose iron axe slipped and fell into the river while he was chopping wood and at the end, his honesty was respected and rewarded. For one, to build the character of honesty entirely depends on his/her family values and surrounding, and school becomes a major part of it. As I sit and reflect on my life as a student, I find several incidents when one was honest and got punished, and at other times, honesty not only saved but also earned respect. As a teacher its different angle, as you are the authority and the child looks upon you with trust. It is difficult to make children understand the concept of honesty. At a young age, children find a lot of things attractive and want to have them. In one such incidence, a girl in my dorm took a toy of another child as she liked it very much. As a housemother, it is my duty to know every child, and somehow I knew who did it. On confronting, the child agreed that she took the toy. Now came the challenge of whether to punish the child for stealing or to spare her for her honesty. Manier times to teach a bigger lesson one has to forgive smaller mistakes. That’s how we earn the trust of the children when they learn that their honesty has been respected. 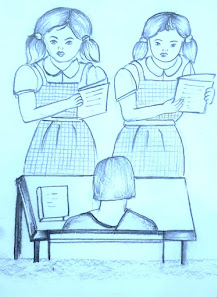 And this reminds me of another incidence where a girl took a book of another child and wrote her name on it. The other girl to whom the book belonged recognized her book and claimed for it and the argument started. Since both the girls belonged to my dorm, they came to me with the fight. On questioning both, I understood who was telling the truth and who was lying. After dinner, I took the girl for a walk and told her that I know the truth. I said to her “You are a good girl, and it must be something important that made you do so. If you are honest with me I will help you as much as I can”. She told me the truth that she had forgotten the book at home and was very scared of the subject teacher. Hence, she took that book. Then she started sobbing, thinking what everyone would say when they will know that she was lying. I told her one such incidence when I had forgotten my book at home, and my teacher did not say anything because I was honest and promised to be careful from next time. After listening to my story, the girl got the hint and promised to accept her mistake in front of her classmate and the teacher. As a teacher, it is also essential to maintain the balance between being strict and discipline and being understanding and approachable. 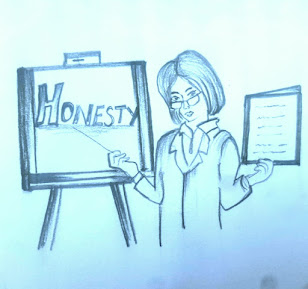 While pondering over this incidence today, I realize the importance of not only educating our children on “honesty is the best policy” but also on why it is the best policy. Just as in this story, one lie leads to others, and soon we find ourselves stuck in the web of our own lies and dishonesty. That’s when we realize that for a shorter benefit, we put our respect at stake. And the fear of losing our respect forces us to say more lies. Honesty is expressing our feelings and opinions accurately, and when we are not doing that, we get into an internal conflict that makes us restless, tense, anxious and fearful.

Hence, Just like Mahatma Gandhi’s Experiments with Truth, let’s do our experiment with Honesty in the class and outside and see for ourselves whether truly, honesty is the best policy?