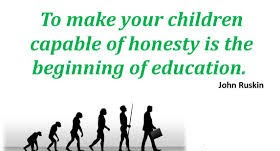 As I sat contemplating the dual qualities of honesty and respect, an entire series of events and stories began reeling in my mind. My earliest acknowledgement of Honesty that I recall takes me back to my childhood. As my parents’ only daughter and the eldest child, I received immense love and care. My father would guide me not only through tough mathematical concepts but also through what seemed like pressing questions about the world around me. These discussions could stem from the collection of storybooks-Padho, Samjho aur Karo (पढ़ो, समझो और करो). This series of books was released by Geeta Press, Gorakhpur.

One day I asked my father: who is God?  Why do you pray? Why can’t I see Him? In response to my questions, he told me that Mahatma Gandhi claimed that Honesty and Truth are two sides of the same coin – two sides that cannot work in isolation and these qualities, themselves, are what we perceive as God. I was still not satisfied. My fervent questioning resumed, and I asked: how do I see God? He promised to tell me more on this elusive topic if I held patience till the following day.

That night I noticed a box of sweets in the kitchen. On opening it, I was delighted to see my favourite sweets. Unable to control my temptation, I gobbled down almost half of it. I was enjoying eating sweets all by myself, as I did not have to share it with my siblings. The following morning, I heard my mother scolding our domestic help regarding the missing sweets. Instantly, I felt relaxed that no one found out that I was the one who had eaten all those sweets.

Later that evening, my father called me to continue our earlier conversation and tried to explain to me why we cannot see God. He said emphatically, “Each one of us has two inner voices. Before we take any action, one voice gives constant go-ahead and encourages us to do whatever comes to mind. The second voice is more prudent. It warns us when an action is not right and dissuades us from it. Those of us, who are honest with themselves, even in the absence of others, can listen to this voice clearly and loudly. This inner voice is none other than the concept of God. So, your God is within you, and it aims to help you deliver all your actions with utmost honesty.”

I immediately remembered the sweets and the realization dawned on me that what I had done was indeed stealing! I was purposely hiding the truth, and this dishonesty caused pain and repercussions for another innocent person. This epiphany troubled me. I closed my eyes and ears tightly and tried hard to listen to my inner voice- It was feeble but yet clear, it was urging me to tell the truth! This turned out to be a Eureka moment for me, I suddenly knew that honesty and truth always come together. I gathered all the courage and confessed the whole incident to my parents and went to my help’s home to apologise. I must admit that the happiness and satiation that I derived from this apology was much more than the one I did after secretly eating those sweets.

My father told me,” You will come across a lot of such sweet temptations in life, but you should never fail to listen to your inner voice- as that is God conversing with you.” I now understood why Gandhi said that truth and honesty are two sides of the same coin. I had learnt that by being more mindful of my inner voice, I could steer myself towards honest actions. 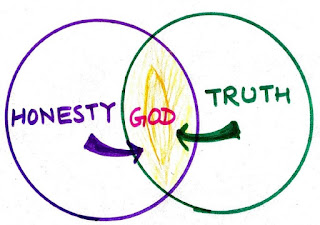 I decided that looking forward, honesty is that one cardinal value that I would not compromise on. I realized that honesty fosters a whole realm of positive qualities, too - courage, fearlessness, and a sense of justice automatically take sides with honesty.

As I grew older, I read about Abraham Lincoln, who was known as “Honest Abe” when he was working as a young store clerk in New Salem, III.  His character precedent was such that even his opponents agreed, without objections, that he was honest, fair and the most deserving candidate for the role of President.

When I joined my first job at Mayo College Girls’ School as a Physics teacher, my father gave me the letter that Abraham Lincoln had written to his son’s school Headmaster, and it truly illuminated my worldview. The line from the letter that stuck with me emphasized how it is far more honourable to fail than to cheat! It goes to show that regardless of how dishonest one has been in their life, they never want their children or students to be dishonest. In a recent discussion with my students, I instructed them to imagine themselves as leaders of reputed organizations. When I asked them to state one quality that they would look for while recruiting managers and staff, they all unanimously agreed on one quality, and that was honesty!

Almost every child is narrated about the ‘kettle’ story of Mahatma Gandhi as the preamble to honesty. Children wonder as to why they should be taught the lessons of honesty. Often, my students ask: what do we get by being honest? The answer to that is that repeated honest actions bring integrity to one’s character and allow one to earn respect from their fellow beings. Looking at it backwards, to earn respect, one requires the integrity of character which, in turn, comes from an ability to be true and honest with all those around us.

I have come to the conclusion that honesty cannot be seen only as a product of mere words or theory. In its entirety, honesty flows from three key steps – Mansa, Vacha and Karmana (मनसा वाचा कर्मणा). The chain of an honest action has to begin with the right thought process by listening to one’s inner voice. It must then flow into one’s communications through words and finally culminate into actions.

The Universe has a salient feature wherein it is constantly aligning itself to move away from disorientation and make way for orderliness and patterns. From an atom to the galaxy (micro to the macro world), everything has a pattern. Similarly, honesty brings forth order and discipline in one’s life. As intelligent species, we humans must hone our skills to listen to our prudent inner voice and make Honesty our lighthouse of guidance to unconditionally help us sail our boat of life through the uncharted ocean of the Universe. 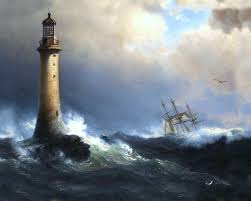 References added to images and one more https://greatamericanhistory.net/honesty.htm

A good one indeed

Very inspiring post and indeed a very honest expression of your experiences and thoughts.

It’s the best narrative which enlightens us on th e same principles as of divine teachings of the BHAGWAD GEETA.. मनसा बचा कर्मना

Very nicely written Arundhati. This article is the perfect beginning to your blogging. I also believe in the same values and beliefs you have talked about in your erudite narrative. I remember an event when I had gone to a mall with my family. My younger one felt hungry and I picked up a chips packet and gave it to her. She ate the chips and threw the packet in the dustbin. I took it out and explained to my daughter that we need to pay for it. She innocently said but nobody saw me throwing the packet. I told her that you were seeing that and that is most important to me.
Keep going. You have all the virtues to inspire and motivate us.

These words mean so true and relatable. It is important to have someone explain the essence of such little things which we often tend to ignore as kids. I have been constantly told by my parents to become a good human being before anything. I do live by these words and happily follow to lead a life which holds values. Thank you for explaining it in such a personal and beautiful manner. This inspires many.

Something so profound has been expressed very simply and clearly!Lovely!