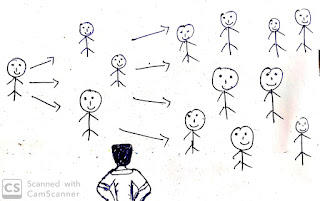 If you come around a post, a story, a meme, or a hashtag on social media, please don't follow the herd blindly and start sharing it. The reason is that you all have been brainwashed in some or other way, which is known as Soft Influencing. It involves shaping the preferences of others through appeal and attraction.
All these mainstream idols have been fed a golden spoon of dollars to share such content which might not seem to be harassing or targeting anything, but they build a particular image of something deep down your subconscious mind.
For example:- The latest Baba ka Dhaba controversy, where most social media users didn't have any idea about who's right or who's wrong, but still everyone was becoming the jury of this activity. The heart saddening thing is that so-called social media influencers are so corrupted that they can defame their own caste, society, country or even their own family.
There could be a hundred-page book where I can factually prove that soft influencing is damaging us mentally daily. The only hope is that the new generation should be smart enough to understand the dual side. Importantly, they should distinguish between influence and manipulation and learn how to protect yourself from the unwanted influence of others.
Nikita Rajpurohit
nra@fabindiaschools.in
The Fabindia School