Thoughtfulness -derived from the word thoughtful means deliberate thinking before doing something.  It means the quality of being considerate and caring for others and own self too. Thoughtfulness, in a way, characterizes the thinking power of an individual and also showcases his maturity level. Reacting to an unexpected situation in a thoughtful way will definitely give a positive outcome. On the other hand, if your mind is over-flooded with negative thoughts, values, and an approach in a haphazard manner will worsen the situation.

Even the golden rule of First Aid inherits in it the value THOUGHTFULNESS, i.e. to say ‘Make Haste slowly and carefully.

Understanding means being willing to forgive other people or be sympathetic because you understand how they feel. An understanding person has many qualities, he is a GOOD LISTENER, OPEN MINDED TO INDIVIDUAL DIFFERENCE & most important HE TRIES TO PUT HIMSELF IN OTHERS SHOE before taking the decision. Mutual understanding is the backbone of every happy relationship, so we must sprinkle it everywhere.

It is better to be called a thoughtful person rather than an irresponsible, reckless person. Thoughtfulness is not only a quality of being kind and thinking about other’s needs, but it is required for unwanted situations. I would also like to share a small incident of my life where I showed both thoughtfulness and thoughtlessness. Some five to six years ago, I received a call saying that the person is from the State Bank of India, Mumbai Branch. He said that due to security reasons, PINs of all ATM cards are being changed with immediate effect. Therefore they asked for my current PIN. In a state of thoughtlessness, I provided my PIN without even verifying that man. He then said a four-digit One Time Password will come to my registered mobile number, and I have to share that immediately. As soon as the OTP came I forwarded it. He acknowledged it and said my ATM is now safe. As soon as I disconnected the call, a thought struck my mind that SBI advertises that it never asks for PIN or OTP from any of its customers, so why don’t I verify the call. My face grew pale, and I became anxious to know the hard fact. At once, I called upon the SBI Customer Care and followed the recorded voice call wherein I was redirected to the customer care agent. The agent confirmed to me that it was a fraud call. I at once got my ATM card blocked; otherwise, I would have been bankrupt that day. So this was my state of being thoughtfulness.

SBI CC suggested I file a case against that call to get punishment, and hundreds of people could be saved from falling prey to such calls. I was about to do that, but then I tried to put myself in his shoes. Though his deeds were wrong, I didn’t file any case, but for my near and dear ones, I shared a post on social media citing the incident so that they could be saved from such fraud calls. 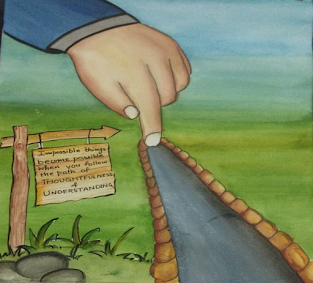