Thoughtfulness and understanding are two interrelated and interdependent values.

To be thoughtful positively in any tiring situation can be very challenging. It is said as you think, your actions will follow accordingly. Being thoughtful is a positive attitude that has to be cultivated slowly as one develops stamina by practising rigorously. When positive thoughts and images surround us, our understanding and response to the demanding situation will be very different.

Our mind should be filled up with positive thoughts all the time, such as cooking, cleaning, studying, walking etc. From morning till night, our thoughts should be corrected. Only with this attitude will our true self come forward, and our understanding of the situation will be deep and unjudgmental.

By being thoughtful with a positive attitude, life becomes inspiring and meaningful.

It all starts with a positive thought!

The following are the three tools I would like to use to inculcate empathy. 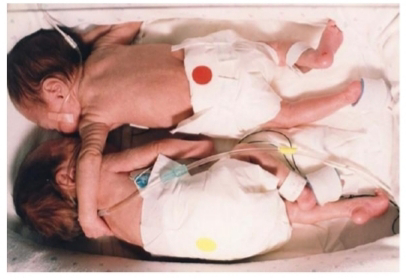 This is a picture from an article called “The Rescuing Hug.” The article details the first week of the life of a set of twins. Apparently, each was in their respective incubators, and one was not expected to live. A hospital nurse fought against hospital rules and placed the babies in one incubator. When they were placed together, the healthier of the two threw an arm over her sister in an endearing embrace. The smaller baby’s heart rate stabilized, and her temperature rose to normal.

Kyrie and Brielle Jackson were born on 17 October 1995 at the Massachusetts Memorial Hospital in Worcester, MA. Each of the twins weighed two pounds at birth. Though Kyrie was putting on a bit of weight in the days following her arrival, Brielle was not doing well. She cried a great deal, leaving her gasping and blue-faced. Brielle was having a terrible day. NICU (Newborn Intensive Care Unit) nurse Gayle Kasparian tried everything to calm her. She held her. She had her dad hold her. She wrapped her in a blanket. She suctioned her nose. Nothing worked.

Then, she remembered hearing about a procedure done in Europe. She put Brielle in the incubator with her sister Kyrie. Almost immediately, Brielle snuggled up to Kyrie. Her blood-oxygen saturation levels, which had been frighteningly low, soared. She began to breathe more easily. The frantic crying stopped, and her normal pinkish colour quickly returned. Over the next weeks, her health improved steadily in her new, less lonely quarters.

Although it’s impossible to say whether Brielle’s recovery was wholly or primarily due to the healing touch of her twin sister, she did improve considerably after Kyrie was placed in the incubator with her. The children survived their rocky beginning and, in time, went home with their mother and father, but the media attention brought about by their story and the now-famous photograph prompted their parents, Heidi and Paul Jackson of Westminster, to change their telephone number.

Source:
Barker, Leslie.   “The Magic Touch.”
https://wwwparentingforbrain.com
The following discussion will follow in the class:
How do you feel after listening to the story?
What kind of communication did the babies have?
Roleplay on these two babies- ( what would they say to each other, how would they behave and will they still be so close to each other.)
When they were born.
When they become 10 years old.
When they become 20 years old.
Draw a picture of your friend with whom you can share feelings and feel connected in your class.

Children should see the following video: