Are We Inherently Musical?: the Sonority of the Soul - Saskia Rao-de Haas 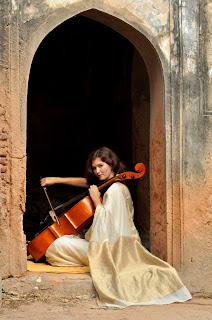 I am always surprised when people think that they are not musical. Consider the following thoughts with me. Nada Brahma, sound is creation, is written in the ancient Vedas. ‘First there was the word’ is written in the Bible. In science we talk about ‘the big bang’ as the start of the universe. Everything produces sound and is born from sound. Even the universe we live in is born from sound. This being the truth, can we still say that we are not musical beings? We have to understand that every living being is indeed musical. If we didnot possess an inborn sense of rhythm, our hearts would not beat in a perfect rhythm. We literally have strings in our throat, our vocal chords that vibrate to create sound: our voice. If we would not have a sense of melody, our voices would be monotone like a robot. We all have a sense of melody and rhythm and most of us have direct access to these inborn instruments!

When this inborn talent is cultivated and nurtured, we can create and appreciate music. This is where music education starts; the acknowledgement that we are ALL musical beings.  There is not a single culture known in the world that does not have its own form of music. Music for prayer and mindfulness. Music for community gatherings in song and dance. Music is everywhere around us, but we often do not make full use of its  power. Music in its most restrictive way is seen only as entertainment and part of the ‘entertainment industry’. In this scenario, music is approached only as a ‘performing art’. It is this limited and limiting approach to music that has clouded the minds of politicians, educators, parents and schools on what the role of music could be in education.  It is this attitude that immediately dismisses the importance music education can play in the overall development of children.

This attitude also divides children and later adults as ‘talented’ and ‘non talented’. I have met innumerable adults who think that they are ‘just not talented’ in music. Why? Because someone has told them when they were young that they ‘could not sing’, ‘had no talent in instrument playing’ or were met with indifference of teachers towards music education. Thisperceived lack in talent is seen as a good enough reason not to pursue any form of music education, which has deprived them of countless invaluable lessons that music education can teach. If we were to pursue the same argument, then other subjects like mathematics or science should be ignored by most children too! Discipline, academic skills, social skills, fine motor skills, reading skills, language skills, leadership skills--the list is endless. This is one of the reasons that we created Sangeet4All Music Education Framework. A music program that honours our inborn musicality and makes use of it in education. I will share more insights about the role music and music education can play for the entire school community in the next weeks.

A world-renowned cellist, composer and music educationalist from the Netherlands. Her Guru Pt Hariprasad Chaurasia said that she has been taught by God, and everyone should listen to her music. The New York Times describes her music as ‘Movingly Meditative’. She is the creator of the Sangeet4All Music Framework, India’s own complete music program for children.

“I would teach children music, physics, and philosophy; but most importantly music, for the patterns in music and all the arts are the keys to learning” - Plato