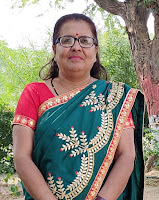 Determination is the positive feeling in us that helps us overcome any obstacle and reach our goal. Determination motivates us to go on further & not to stop. According to Thomas Edison, the inventor of light, when he failed thousand times, he said, ‘I have not failed! I’ve just found 1000 ways that wouldn’t work.’ Many more such great people didn’t stop but reached their goal with their sheer determination.
Many times some horrific setbacks lead people to be determined and live the best of their life. I would like to share my daughter’s story with you all where she showed her determination and achieved her goal. My daughter Vaishali was not so good in her studies, especially her Science & Math. She was also not good at Sports. She never participated in games. She always sat under the tree chatting with her friends under the tree.
Her turning point in her life came after her results of Class X. After that, she was determined to prove herself. She started participating in games and reached State Level in Badminton. She represented JNVU University at College Level. She joined NCC and participated in Republic Parade at Jaipur. It was all because she was determined to prove herself. She worked hard not only in Sports but also in Academics. She secured first division in Class XII & graduated. In her MBA, she secured distinction. She also became the Head Girl in her school and received the trophy of Excellence in Skill. With her hard work, perseverance & determination, she pushed herself to reach her goal.
It is rightly said that determination motivates us to improve ourselves, make positive changes in our lives, and increase our chances of success. It enables us to build dreams, live healthier lives, and strengthen our relationships with others.
Bharti Rao
The Fabindia School
bro@fabindiaschools.in