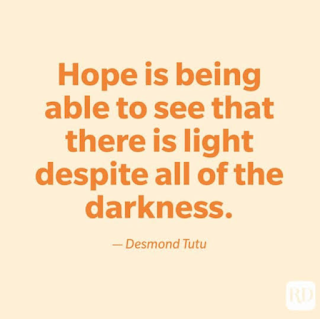 A student who has lost all hope

As we know, hope sustains life. Without hope, darkness seems to be all around.

I would like to share one incident from my teaching experience about an encounter with a child who lost all hope in life. Minki was a thirteen-year-old girl studying in the class tenth and was an average student. It was the time of Diwali break that the school was closed. But then, even after the break, Minki didn’t come to school for quite long. Later, I got unprecedented news from one of my colleagues about the sudden demise of Minki’s father due to a silent attack.

A month passed, and she still didn’t attend school. Being in the board class, the main concern was her academic lag. So, I called her mother and talked about her absence from school. She kept on saying that Minki would attend the school soon, but...

Having passed another week, One day, I finally decided to see her and know why she did not come to school. Upon meeting her, I came to know that after her father’s death, this girl had lost all her hope to move ahead due to her bond with him; moreover, he was the sole bread earner. Minki’s mother had tried to console Minki many times that she would make the best possible effort to run the family and not let them suffer. But the girl had lost all her faith and wanted to discontinue her study. With all my best possible efforts, I persuaded that girl to join the school and continue her study to eventually support her family. She then joined the class the next day, but she kept saying she wouldn’t be able to clear the exam. Since she was the very lovable daughter of her father, she couldn’t cope with the significant loss. She always seemed to be disturbed. Seeing her this way, I consoled Minki and motivated her to do something for her father’s sake. All her teachers were supportive of her and encouraged her to move ahead. Whenever she needed help, all were ready to assist her. Even some of the students were quite helpful to her. They helped Minki to complete her work and even during revision time. Eventually, She appeared in the exam and got good marks in the board exam.

Impact: The child was able to come out of a challenging situation with consistent efforts by the teacher.

The teachers dealt with the students with love, care and encouragement.

Advice to the Educators: Values like Patience, love, and care help deal with such situations.

A student with no friends in the school

“A real friend walks in when the rest of the world walks out.” — Walter Winchell.

Sara was a new student in her class. She joined the school during the Remote Learning Era. After the pandemic guidelines were eased, schools reopened, online classes were no more, and all students were called for offline classes. It was observed that Sara used to stay alone, and even during the lunch break, she would sit and eat alone. She always had complaints about other students in her class. Later, when the students were asked about the complaints against them, they were all found innocent. And it was found that Sara was not able to adjust herself in the class due to social immaturity. She couldn’t talk well with a group of students. In this context, the School counsellor was involved, and she had taken some counselling sessions for Sara. Later, some improvement was seen, and we saw Sara moving with her friends in the school playground and during Lunch time. She started sharing her food with others. Her mother was also requested to help her cope by taking her to some social gatherings and letting her spend some time in the park or with her nearby friends to overcome this hesitation.

Advice: Please try to help the child adjust to new surroundings. Be empathetic, helpful and kind.