After two successful years, The Gold Award Holders Society (GAHS) is happy to announce the Spiti Gold Solar Project 2013. We only accept limited numbers, and are happy to assist young people from all over the world. Gold Award Holders are most welcome and work with the Indian alumni; Gold participants will be able to complete the Residential Project and the Adventurous Journey.

Look forward to building the event of major significance and have the international community work with us for our YES (Youth Engaging Society) Projects. The office of GAHS India is  at New Delhi and the President of GAHS is the spirit behind Ecosphere (the partners for the Spiti Gold Solar Project 2013).

Welcome to write to us on sd@ebd.in for any further information. 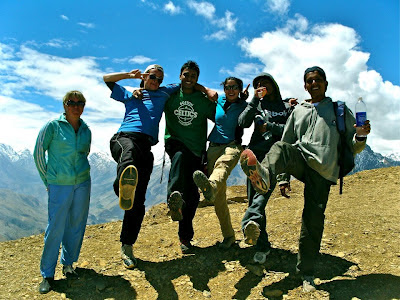 During this journey you will be assisting the local community in construction of a solar bath. The volunteers will participate in the actual construction of the solar bath and the set up of a solar water geyser (Evacuated Tube Condenser) and will be assisted by a dedicated team of a qualified mason and representative from Ecosphere. The activity will entail physical work. The construction period will be 7 to 8 days. The trip is intermixed with work and pleasure. During this trip you will also be visiting some of the highest villages in the world, going on a high-altitude trek, visiting some ancient monasteries dating back to over a 1000 years and take a yak safari and mountain bike if interested. Traditional homestays further enrich the experience by giving one an authentic understanding of the life and culture in a Spitian home.

Significance of this Tour
The construction of a solar bath is of great significance in this region as great amounts of fuelwood, coal and wood is burnt for heating water which contributes to CO2 and black carbon emissions. The latter having far more damaging affects on the melting of glaciers and snow on a local level. Through the set up of a solar bath which includes both a passive solar structure as well as a solar water heating system, we enable the people to cut down on emissions (especially reducing black carbon) as well as enable them to have better hygiene through regular availability of hot water.

Costs including taxes for a group of 15 persons
-  All accommodation starting Day 2 to Day 15
-  Meals starting Day 4 dinner to Day 14 dinner
-  All bus/ jeep transfers Day 1 (with bus to Manali) to Day 15 (bus to Delhi)
-  Project support
-  Support staff on days required
Excludes:
Mineral water and beverages (other than those provided), Monastery Fees, Tips, Insurance  and expenses arising out of unforeseen circumstances

Please Note:-
a) This is a carbon neutral trip. It is Ecosphere’s endeavour to generate minimum emissions on this journey and whatever emissions that we do generate are calculated and offset through investments in our in-house renewable energy projects within the region. These include construction of passive solar houses, green houses and investing in other sustainable renewable energy alternatives such as solar water heating systems, solar cookers, solar lighting, etc.
b) A different kind of holiday - Ecosphere is a social enterprise and your travel with Ecosphere will contribute to the development and conservation of the region. Insights into the local development and conservation issues and a peep into Ecosphere’s initiatives

Sign up Form online
You may want to simply fill the From shown below and or email us if you have trouble accessing the Form. Please email us at sd@ebd.in for early bird discount and more help.

PLEASE WAIT A FEW SECONDS THE FORM WILL BE HERE ASAP!

Spiti Report
9th June 2012 to 12th June 2012
The 15 day Gold Solar Project took off with an overnight journey to Shimla. All the participants were randomly divided into two groups to increase interaction among them and boarded two separate buses for Shimla. After reaching Shimla early in the morning the next day, we immediately took off for Kalpa in 3 separate taxis. Kalpa was our introduction to snow capped mountains. After an overnight stay in Kalpa, we left for Kaza, a part of the Spiti Valley the next day where we had an overnight stay as well. The next day we left for the Key monastery. After reaching the monastery in the later part of the day, we were given an informal orientation. Thus, after 3 days of travelling, we settled into our accommodation for the next 2 weeks.

13th June 2012 to 16th June 2012
We started with our first day of work. The participants were divided into groups and each group was given a separate task everyday. The tasks basically included farma work, mud work, path work, tank work and tractor duties. The groups were so formed that participants from different institutions were clubbed together in a group to enhance inter-regional interaction.

17th June 2012 to 20th June 2012
We left for our 4 day trek early in the morning on the 17th of June 2012. The first day was an 8km uphill trek to a village called Komik. It was indeed a difficult task for the participants as they weren’t acclimatised to high altitudes. After an overnight stay in Komik, we left for Demul the next day. This was a 12km uphill as well as downhill trek and we reached Demul late in the evening. The next day, we trekked upto the highest point called Bhalari. Later in the day, the villagers had organised a cultural event for all the participants. After staying overnight, we left for Lalung, a downward trek and visited the sarkang temple also.
We later left for the Key monastery.

21st June 2012 and 22nd June 2012
These were the last two days of our stay at the monastery. Much of the work being completed, we were left with only the plastering and painting and setting of the solar panel. This, according to the participants, was the fun part of the work.
The completed Solar Bath was inaugurated by the King of the Spiti Valley in a ceremony held at the monastery. Later, the participants performed various skits and songs as a part of the “closing ceremony”.

23rd June 2012 to 25th June 2012
The next day we left for Manali early in the morning. But, unfortunately, we got stuck due to a landslide and had to spend the night at a dhaba. The next day we crossed the landslide hit area on foot and went to the nearest bus stop sitting in the back of a truck. After the roads opened, we left for Rohtang Pass in our respective taxis but got stuck in traffic, again. We reached Manali in the evening on 24th June and left for Delhi immediately.

Associate members, sponsors and individuals are welcome to sign up for the membership of The Gold Award Holders Society.

The funds are invested in projects and for doing youth development work.

Rohit and Devanjali are representing India at GAHN 2012

Youth Leadership Week Sept 2012: Communicate, connect and create ; this is the best way to help the young people find themselves and we at Brewing Knowledge are supporting ...