You must have fun in learning 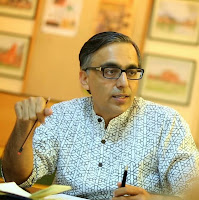 Thank you, Mr. Bissell, for you, we are very happy to be here today. We are grateful to you for having us all together on a mission, a mission that started almost   25 years back and more, so all the board members, parents, friends who all are participating in making the mission a success. What you see here is the journey partially complete, this is just the beginning. I often say and for us the happiest day will be when we see a Fabindian lead us in every sphere of life.

It is our dream that we have a Fabindian lead us not only in Study but also Sport, Skill, Service and what else? Absolutely! We want the Fabindian’s to excel in all the four fields: Service, Skill, Sport and Study. With this motive, we feel the quality of education which the school offers is far superior to even mainstream school in the country. I travel all over the country, I have come just from Delhi, I have been to many cities, but I tell you that nowhere do you breath the clean fresh air, that you breathe here.

Thank you Principal Ma’am, thank you Chief Guest for joining and doing everything to make this evening a wonderful one. And it is wonderful to see young people like our Head Boy, Head Girl, the Prefects all taking charge. It is wonderful to see them being part of the society who are now leading to give us various skills, sports. It is wonderful to see a boy reaching the District level in soccer, It is fantastic to see children cycling all the way to Ranakpur. It is even great to see children work on Service project. The Social Service League in the school is a noble idea, we don’t have a Social Service League in any school in Bali. The Art and Craft, the Music and the Orchestra, only The Fabindia School, gives us. Let me assure you, it is all to give your child the necessary space. It is all to give your child the necessary opportunity to excel. It is for your child, of your child and by your child. Children love having fun, and we hope they continue to have fun. Teachers love teaching and the joy only spreads when children have fun so let us all be together in the joy of learning and all the best.

She, a child of around seven years sat with me on a bus. We were on a holiday. At the last tourist spot, I had bought her a small handbag with a little rose and two leaves pasted on it.

Curious, as every child is, she had dissected the bag and the flower had almost come out. The flower started dangling like the tail of a weaver bird's nest. This was bothering her and she was repeatedly trying to stick it back. This attempt gradually became violent. She harshly started to beat the flower with her water bottle. She was hitting the flower as if she was nailing something into a hard wall. It was that hard and violent!

I looked at her. I wondered why is she expressing so much violence on a plastic rose flower.

"What are you doing Asha (named changed)," my voice calmed her violently hitting hand. "It's a small flower. Can you stick it back by hitting at it?" Her face suddenly regained sense. It was as if she understood what she was doing. Till then her violence was driven by some unconscious, invisible factor.

When I calmly talked to her she regained sense. "You can go home and stick it with a strong glue or with a needle and thread," I said.

The violence and anxiety flew off from the child immediately and in no time she forgot what she was doing. A little later she opened up about everything she was facing at home. I hadn't impelled her to do so. I was awe stuck that a child is  capable of such complex thoughts and observes the adult world so closely.

Children are impacted by the negative and the positive around. Education and educators have to make children aware of their true selves. This case illustrates how simple it can be to do so.

I want to leave two message here for parents and teachers.

Second: You can't be a parent by just giving birth. Parenting is not living social fancies. Learn about parenting the way you learned to be good doctors and engineers!

How we can help you?

SchoolEducation.Com: How we can help you

Our Focus
Impact:
To make the services readily available for charities with a mission of 'providing affordable quality education', we have a unique subscription plan of Rs. 25,000.00 per month. Our monthly subscription plan provides mentoring for the school leadership, brings about awareness online and helps deliver a sustainable development model for the social enterprise. Service delivery is by phone, email, chat, blogs and other social media.
We even visit our partner schools and help train staff on campus, call us for details and other plans for school development consulting, please.
Please contact:
Devanjali
Advisor Business Development
Email: dd@ebd.in, Phone: +919811133430
www.SchoolEducation.com
EBD Educational Pvt Ltd, India
Helping Schools Deliver Better